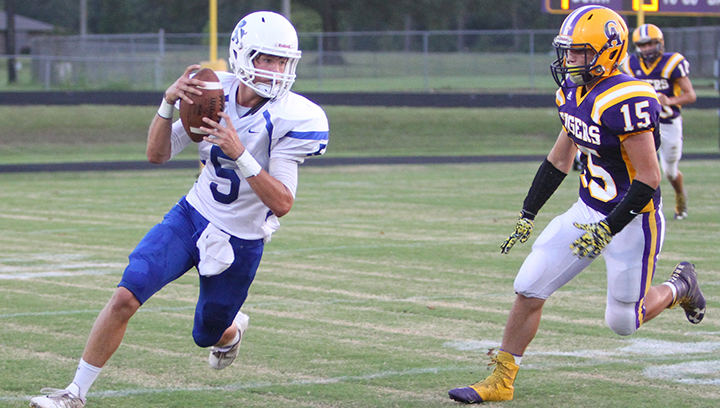 Photo submitted/Brookhaven Academy’s Fisher Warren tries to avoid Wyatt Brabham of Centreville during their game earlier in the year. The Cougars will face Columbia on the road Friday.

One could rightly argue that high school football is comprised of two “seasons.”

The first is the non-district season. Through these first four or five games, teams and coaches are given a chance to settle into the new year.

Players find their roles, coaches learn who is best suited for what position and teams begin to establish themselves as contenders.

The second part of the season, the district slate, holds much more importance than the former. These are the games that can define a season and make or break a team’s playoff hopes. Most of the teams in the area will be facing a stiff challenge as their districts are composed of some of the best teams in their classifications and in the state.

As this critical portion of the season approaches, it is important for fans to understand just where their team stands in district play in order to adequately determine their playoff chances.

After all, a team could lose every game in non-district play and still make a deep playoff run. Loyd Star won only two district games last year, but was still able to sneak into the playoffs so don’t be quick to discredit your favorite team just because they are in a tougher district.

The Cougars are midway through their season and have yet to attain their first win. They are improving on the offensive side of the ball, but continue to give up chunks of yards and points on defense.

BA is one of the smaller teams in its district, even for a private school with about 16 players. They have faced two district foes in Adams County Christian and Cathedral and lost both games by double digits. Their next contest pits them against a Columbia team that is likely to contend for the district crown. Even with a massive improvement down the road this season, they would be hard pressed to manage as much as one win in their district.

Rest assured Panther fans, this is not the same team that lost its first six games in 2015. This year’s edition of the Brookhaven Panthers is a year older and stockpiled with playmakers and weapons.

They are competing in Region 3 of 5A, which is headlined by Laurel, Wayne County, West Jones and Natchez. Not to be forgotten at the back end of that district are a 4-0 Wingfield team and a scrappy 5-0 South Jones squad. Still, if there was a year for the Panthers to surprise some folks this would be it. Last year’s 5A state champion, the Wayne County War Eagles, seem to have fallen off. Laurel is its usual self, but Brookhaven has the right weapons in the right places and home-field advantage on their side. I expect Brookhaven to turn some heads this year.

For the sake of space and simply because it makes more sense to do so, the three area schools (West Lincoln, Loyd Star and Enterprise) in this region will be discussed in one section.

Region 7 is home to defending 2A champion Bassfield, but the Yellowjackets look vulnerable and have already dropped two games this year. Other teams in the district should be gunning to knock the state champions off their perch. Prentiss is 4-1 on the year and looks to be the best bet to do so.

With Amite (1-3) supposedly on the downslide, Loyd Star (2-3) could also make some noise. They have played relatively well save for two close losses in non-district play. I expect them to win at least three district games, including victories over Enterprise and West Lincoln.

As for Enterprise and its formidable running game led by Zach Hodges, Tanner Waldrop, Marvin Butler and Darren Richardson, I am betting they surprise some people this year and win at least two district games against West Lincoln and Amite. The Bears of West Lincoln may have a chance late to win at least one district game, but they face an uphill battle in trying to do so.

The Cobras may have the toughest test of all the teams in the area. Their district is headed by perennial powerhouse Hazlehurst (5-0), who has looked every bit of a district champion this season. Franklin County is talented as usual and the game between them and the Indians in October could likely determine the 3A Region 7 champion. I would be crazy to say the Cobras could win such a loaded district, but a third place finish and a playoff berth is feasible.

It has been tough sledding so far for coach Gareth Sartin and the Bobcats. With the exception of a close loss to Enterprise, the Bobcats have lost all of their games by two scores or more.

Their district is tough as well, with Resurrection Catholic, Sacred Heart and Stringer at the top of its ranks. Mount Olive has already shown its strength by demolishing Enterprise and West Lincoln, and Stringer is already 2-0 in district play after manhandling the Bobcats last week 47-14.

Sacred Heart or Resurrection Catholic are my favorites to hoist the 1A Region 4 crown. Bogue Chitto’s best bet for a district win may come this week at homecoming against Salem.

Anthony McDougle is sports editor of The Daily Leader. Contact him at anthony.mcdougle@dailyleader.com

The capital murder trial for Jamaal Brown, a man accused in 2014 of killing a 13-month-old child, has been reset... read more