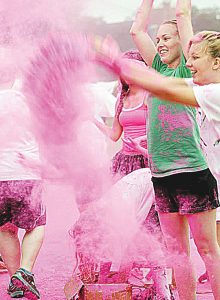 Photo submitted/Pink is the only color used in the annual color run hosted by Lincoln County’s MSGirls4ACure. The eighth annual 5K Breast Cancer Color Walk/Run will kick off Oct. 1 on the second day of the Ole Brook Festival. Registration for the 5K will begin at 7 a.m. The entry fee is $25 for an adult and $12 for children 10 years old and under. The actual run will start at 8:30 a.m. at the main stage.

The word cancer holds a deep meaning to every individual. Probably every person in the world has a connection to the disease, whether it be their own fight or the fight of someone they know.

Lincoln County’s MSGirls4ACure recognizes the havoc cancer can cause in someone’s life, especially breast cancer. That is why they have committed themselves to helping find a cure to the type of cancer that affects 1 in 8 women in the United States.

Locally, they’re also planning to help financially assist three families in the community who have been affected by breast cancer.

In an effort to raise awareness for the disease, the group hopes to pink out downtown with its eighth annual 5K Breast Cancer Color Walk/Run on Oct. 1 — the first day of Breast Cancer Awareness Month.

“It’s our eighth annual run, and our second year to have a color run,” MSGirls4ACure member Olivia Wallace said. “The only color we will use is pink, for breast cancer.”

The 5K Walk/Run will kick off the second day of the Ole Brook Festival. Registration for the 5K will begin at 7 a.m. The entry fee is $25 for an adult and $12 for children 10-years-old and under. The actual run will start at 8:30 a.m. at the main stage.

In the past, the group has taken the proceeds from the 5K and participated in the Susan G. Komen three-day 60-mile walk.

“This year, we decided to keep it local — within Lincoln County and the surrounding counties,” Wallace said. “We plan to take part of the proceeds from the 5K and help three families in the community affected by breast cancer.”

MSGirls4ACure will pick the three families in need from those who entered the group’s essay contest.

“We had families affected by breast cancer submit an essay on why they deserved to win and explain their needs,” she said. “We will assist them with a major need. Usually those needs range from helping pay for treatment, to paying for gas to get to the person’s treatment.”

The rest of the proceeds from the 5K will be used to support other families throughout the next year, Wallace said.

MSGirls4ACure began with two sisters, and has grown in nine years.

“Over the years we have gotten different team members,” Wallace said. “Throughout the year, we get together to discuss our main fundraisers, and what we plan to do with the profits.”

The group is currently made up of Wallace, Shannon Dewey, Margarette Cook, Nicole Ready and Leigh Ann Martin.

The goal for the group’s 5K and other fundraisers is to raise awareness of breast cancer throughout the community.

“In general, the more people that are aware, the more publicity and money the disease gets,” Wallace said. “It takes a lot of money to conduct breast cancer studies and treatment. We are just trying to do our part in bringing awareness to the situation.”

For more information about the 5K or MSGirls4ACure, contact Wallace at 601-754-9991 or MSGirls4acure@yahoo.com. Registration forms can also be picked up at the Lincoln County Chamber of Commerce.

Lincoln County School Board members this week postponed a decision to determine whether a logger should pay the school district... read more