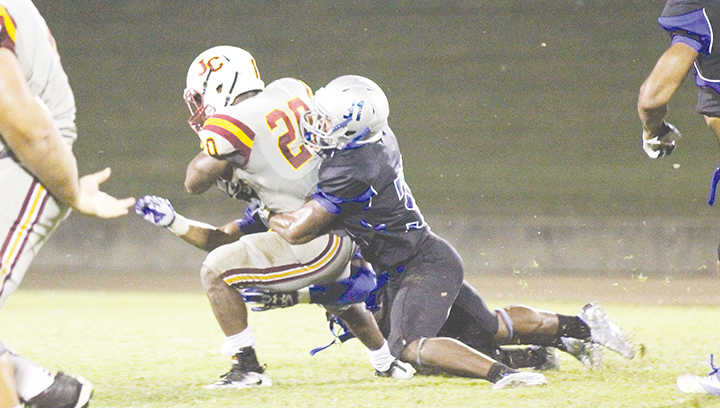 Photo by Amy Rhoads /JCJC running back Scott Phillips is wrapped up by Co-Lin defensive back Jaquarius Landrews in the Wolves’ win at home against the Bobcats Thursday.

Much like its season thus far, the Copiah-Lincoln Community College football team’s home game against the sixth-ranked Jones County Junior College Bobcats had its high and low points.

The Wolves only managed 10 points in a first half defensive struggle, but they responded with a 17-point second half to escape Stone Stadium with a 27-22 win  Thursday night.

For the Wolves, the win should hold a great deal of significance. For one, it keeps their postseason aspirations alive. It also serves as a major confidence booster after Co-Lin struggled in a 21-7 defeat at the hands of Mississippi Gulf Coast Community College last week. Co-Lin quarterback Dominic DeLira had arguably one of his finest games of the season, completing 19 of his 36 passes for 257 yards and three touchdowns.

“We had some adversity last week,” the Wolfpack signal-caller said. “That game left a bad taste in our mouth and I think our team responded well by bouncing back and getting a win against a good team.”

Running back Ladarius Galloway has been a steady force for the Wolves this season, but was kept relatively quiet by a stout JCJC defensive front. He had 21 carries for only 57 yards on the night.

After the game, Co-Lin head coach Glenn Davis said he was pleased with the things his offense was able to do against the Bobcats for the most part.

“We were able to do some good things, but we have to finish drives,” the head coach said. “We have to get better in the red zone and that’s something we will make a point to do moving forward.”

Wideout Nero Nelson, a player revered for his explosive playmaking abilities, was responsible for a lot of those good things.

He had four catches for 115 yards and scored a crucial 62-yard touchdown late in the fourth quarter to give his team the lead.

The Wolves’ dominant defense has oft been the topic of discussion this season, so Coach Davis said it was good to see the offense rise to the occasion.

“Tonight it was one of those deals where we had to put up points to help out the defense. I really thought it was big that Dominic came in and had a big game with no turnovers,” Davis said.

In the first half, dropped passes plagued several of Co-Lin’s drives and gave Jones enough momentum to jump out to an early lead. The Bobcats would draw first blood when running back Scott Phillips, with the help of solid blocking, went 52 yards untouched to put JCJC up 7-0.

The JCJC defense asserted itself from the first snap, and did not surrender a score to the Wolfpack in the first quarter.

The Wolves made their way downfield in short order during a drive at the beginning of the second quarter, but could not get into the endzone. Co-Lin settled for a 30-yard field goal from Griffin Sublett to make the score 7-3.

The Bobcats consistently pinned the Wolves in their own territory with great punting, and it proved to be a factor in their next points of the game.

After a good punt landed inside the Wolves’ 10-yard line, a few big plays by JCJC’s defensive line led to Galloway being stuffed in the endzone for a safety. Down six points with 1:32 left in the half, DeLira connected with Guyton on a 43-yard touchdown pass to give Co-Lin a 10-9 lead heading into halftime.

The Wolves got a quick three points on a field goal from Sublett to open the second half, but the Bobcats quickly answered the score less than four minutes later. The visiting team capped a 65-yard drive, bolstered by a 43-yard pass from quarterback Derric Hawthorn to Nate Cohen, with a one-yard rush from Phillips. The Bobcats missed the extra point, but maintained a 15-13 lead.

Their next touchdown would come in dramatic fashion.

A decision to go for it on fourth down proved to be the right one, as safety Jonathan Abram, who had lined up in the backfield in the Wildcat offense, completed a 33-yard pass to Chance Tidwell. The score put the Wolves in a 22-13 hole.

The Wolves took the lead with 9:46 left in the fourth on Nelson’s score, then sealed the deal when Erick Grossley caught an eight-yard touchdown to put the final score of 27-22 on the board.

Co-Lin returns to the comforts of Stone Stadium next week to face the East Central Community College Warriors. Kickoff is set for 7 p.m.

Starting tonight, the Ole Brook Panthers and many other schools in the state get a clean slate. When they take... read more