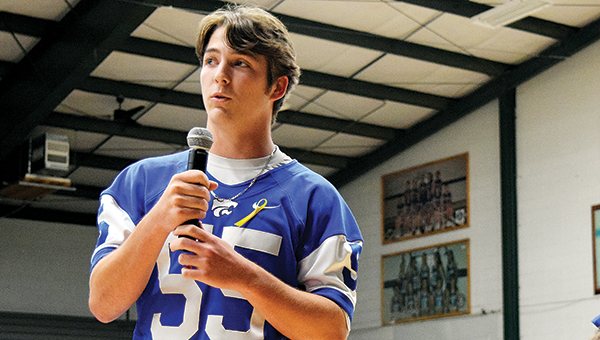 Photo by Julia Miller / Connor Griffin was diagnosed with ependymoma at 5 years old. He was among three Brookhaven Academy students recognized at a Childhood Cancer Awareness pep rally in September.

Connor Griffin was just 5 years old when he had a back pain that wouldn’t go away. He had recently fallen off his bike, so his mother, Lee Ann Griffin, at first assumed it was just a lingering injury from a common childhood incident.

A few days later, she became concerned when Connor refused to ride the four wheeler with his pawpaw. She took him to a hospital, and the doctor said it was just growing pains and to administer ibuprofen. 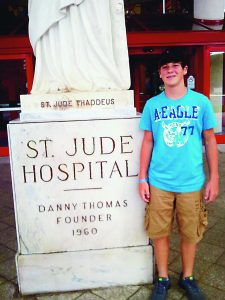 That diagnosis did not sit right with Lee Ann, so she decided to take Connor to Dr. Michael Patterson at Southern Bone and Joint in Hattiesburg. There Connor was given an MRI. The Griffins had to wait two days before they would know anything, and that’s when the severity of it kicked in.

The MRI had shown that Connor had a tumor the size of a man’s pointer finger on his spine.

“The doctor asked if we knew anything about Le Bonheur (Children’s Hospital in Memphis, Tennessee),” Lee Ann recalled. “They’re waiting for you. You need to get there as soon as you. That’s when I knew it was serious.” 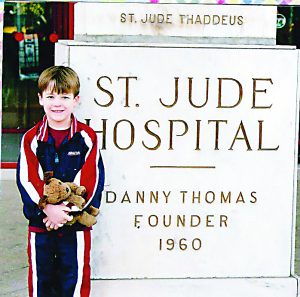 Though she knew it was serious, she reassured all her concerned friends that everything would be fine. Lee Ann had just finished a Bible study on faith.

“It’s going to be fine; God’s going to take care of this,” she recalled telling her friends. “People were calling me, and I was consoling them.” 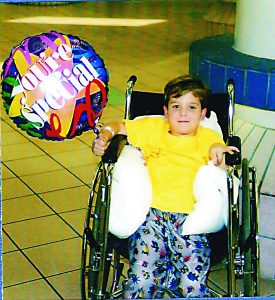 Once in Memphis, they were told the tumor was intertwined with the spinal cord, and the doctors would have to fillet the spine to get to remove the tumor.

“They told us he may never walk again,” she said.

That was on a Friday, and they would have to wait until Monday at 7 a.m. to perform the surgery.

“We had friends leave Brookhaven at 3 a.m. to just pray with us,” she said.

In fact, over the two-week stay, the Griffins were overwhelmed with the support they received from the community, particularly from Easthaven Baptist Church. Gift baskets and presents flowed in, with gifts they had no idea they even needed, like rolls of quarters and books of stamps.

“Every little need was met,” she said. “He got so many toys that he passed them out to other kids.”

The doctors told the Griffins the surgery would last six to seven hours, but they brought Connor back out after only three.

“I knew it was either very good or really bad,” she said.

After examining the tumor, they finally got their diagnosis — ependymoma. This  type of cancer is found in the brain 95 percent of the time, so it was unusual to be found in the spine.

“We were devastated,” Lee Ann said. “The only reason we weren’t in the fetal position was prayer.”

“I told everybody you were going to heal him,” she said. “One night, I was crying. He spoke to me and said ‘It is cancer, and I’m bigger than cancer. Anytime he’s on the football field, basketball court, baseball field and takes off his shirt and kids ask about his scar, he’ll say I healed him.’”

After the surgery, the doctor’s told Connor to go at his own pace. At that time, they still weren’t sure that Connor would be able to walk, and he was confined to bed.

“It felt like I was in there forever,” he said. “All I wanted to do was get up and play.”

He recalled an remote control car that he enjoyed playing with. He’d drive it all over his room, and one day a nurse walked in and he accidently ran it into her.

“I didn’t know what was going on,” he said. “All I knew was they gave me bad medicine and stuck me.”

Not only was he confined in the hospital, but he couldn’t understand why he couldn’t see his little brother Cole or his cousin JT. The three boys were inseparable at the time, but the Cole and JT were not old enough to visit him in the hospital.

“Those three were having separation anxiety,” Lee Ann said.

After a few days of being confined to bed, Connor decided he was ready to try to walk.

“I wanted chicken nuggets, and I wanted to get up and walk,” he said.

“I think he needed to know he could do it,” Lee Ann said.

“Everyone started crying,” Connor said. “I remember thinking, ‘Am I doing it wrong?’”

Luckily, the two-week stint proved to be the longest Connor would spend in the hospital. The doctors said the cancer was best treated by surgery, and they believed they had removed it all. Since then, Connor continues to be monitored by St. Jude Children’s Research Hospital.

Twelve years after doctors questioned whether he would ever walk again, Connor is now a starter for Brookhaven Academy’s football team and frequently earns the title of top tackler.

“When you read Connor Griffin’s name in the paper or hear Dr. Moak say it over the PA (system), it’s more than just about Connor Griffin; it’s a reminder of God healing him,” Lee Ann said.