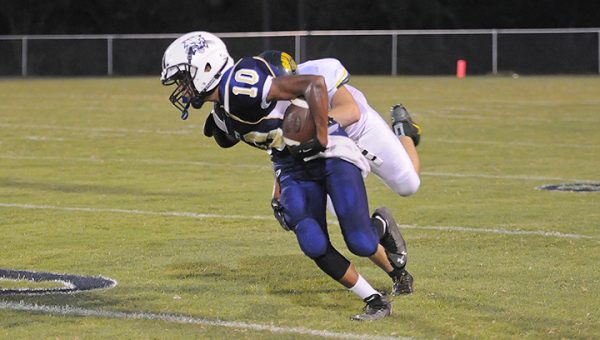 Photo by Teresa Allred/
Bogue Chitto’s Lafredrick Dillon is pursued by a Salem defender in the Bobcats’ loss Friday night.

The Salem Wildcats got their first win of the season Friday night,  defeating the Bogue Chitto Bobcats 32-6 in a Region 4-1A divisional game.

The Bobcats were celebrating homecoming and hoped to get their first win of the season.

However, Salem had something to say about that. Defense was the difference in the ballgame, as both teams’ defensive units performed well despite what the final score might indicate.

Bogue Chitto’s Trey Nettles shined in particular and came up with two interceptions and a fumble recovery.

The Bobcats set the tone early, kicking an onside kick and recovering it. Running back Chris Taylor did most of the heavy lifting inside the tackles for the Bobcats.

Bogue Chitto had several big plays to get them deep into Salem territory, but penalties and miscues forced them to punt the football away.

The Bobcats got off a good punt, but Salem’s Julius Faulk made the most of it.

Faulk let his blockers set up to give him a running lane,  and found the endzone 85 yards later to give Salem a 7-0 lead.

The Bobcats started their next drive deep in their own territory and had to go the length of the field to get a touchdown.

The drive was stalled with under seven minutes left in the first quarter when Faulk came up with an interception. The Wildcats called Faulk’s number again  on offense, and he punched in a 15-yard touchdown.

At the end of the first quarter, the Salem Wildcats were leading 14-0.

In the second quarter, it became evident Salem intended to dominate the remainder of the contest. Salem’s offense made a mistake and put the football on the ground, with Nettles  recovering the pigskin from the pile.

The turnover breathed life into the Bobcats and the offense was running on all cylinders before another pick gave the Wildcats the ball back.

Fortunately, Nettles was able to come up with his first interception of the night to keep the Wildcats out of the endzone on the drive.

The Bobcats finally got positive plays and put an exclamation point on the drive when Henry Thomas found the endzone on a 40-yard reception. Bogue Chitto failed to convert the two-point attempt, and the score stood at 14-6.

The Bobcats’ defense made another crucial play their next time out, as Nettles got his second interception of the night.

On the next drive for the offense, Bogue Chitto’s Bryce Langley  reeled in a 48-yard reception to put the Bobcats in their own territory.

Salem’s Darrion Ratliff  ended the home team’s hopes of scoring when he snagged  a pick out of the air.

Wildcat kicker Ethan Leal attempted a 33-yard field goal to add to the Salem Wildcats lead, but was unable to convert and went into halftime trailing 14-6.

In the third quarter, a fumble by Bogue Chitto would stall an early drive.

Salem took advantage of the miscue, as Ratliff found the endzone on a three-yard run. After a missed extra-point attempt, the Wildcats were up 20-6.

Later, Faulk got the ball on fourth down and converted  for the Wildcats.

Bolstered by the clutch conversion, Salem reached the endozne again as Damien Brumfield found the endzone on a 10-yard run. Salem missed the extra point, but still led 26-6 in the third quarter.

In the fourth quarter,  Ratliff found the endzone on a 10-yard run, but the Wildcats missed another extra point to make the score 32-6.

“Our defense gave up two scores in the first quarter, but our offense got back in the game with that big reception by Henry. Our boys played hard tonight, we just have to improve on our mistakes this week,” said Bogue Chitto head coach Gareth Sartin.

The Bobcats travel to Mount Olive Friday, hoping to get their first win of the season against the Pirates.  Kickoff is set for 7 p.m.