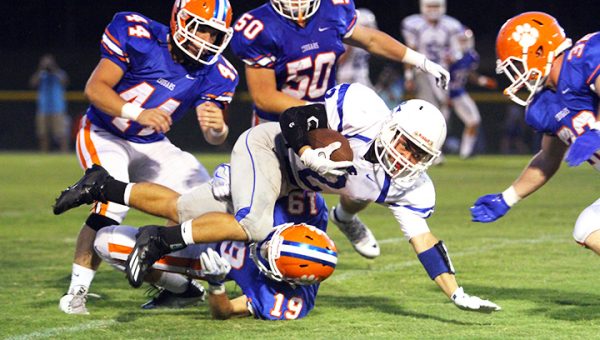 Early miscues by BA allowed Columbia great field position. They took advantage by running out to a five-touchdown lead in the first quarter.

Ras Pace added a 13-yard score in the quarter as well, but Wiley Cleland owned the rest of the period.
The freshman skill player threw three touchdown passes, two of which went to wideout Luke McKenzie. Cleland’s other touchdown heave was a 43-yarder to Aaron Thomas.

BA was only able to compile 153 yards of  total offense, 66 of which came from senior running back Christian Huffman. Sophomore quarterback Keegan Smith connected with senior wide receiver Fisher Warren late in the game for a touchdown pass.

BA hosts Parklane Academy Friday night for homecoming. Reunion classes will be recognized at halftime. Kickoff  is at 7 p.m.

Brookhaven Academy will recognize alumni classes that end with a “6” Friday night for homecoming and hold a small reception for them in the new cafeteria at 5 p.m.

Campus tours will be available beginning at 5 p.m., followed by the homecoming Court presentation at 6 p.m.

Class members in attendance from the classes of  1976, ‘86, ‘96 and 2006 will be recognized at halftime. The classes  will be setting up tents around the field for meeting places.

The class of ‘96 will do the same for classmate Alan Smith, who passed away in the sixth grade.
The Class of 2006 will honor the memory of Kurt Perkins and Hannah Smith.

“I’ve spoken to a few representatives of these alumni classes and they have been planning their reunion for months,” Brian Emory, BA’s director of development, said. “We want to offer them an air-conditioned space so they can flip through yearbooks, get a bite to eat and catch up before heading out to the field.”

The cheerleaders will perform at halftime, followed by a special presentation from the 73 members of the jazz production program in K5 through sixth grade.