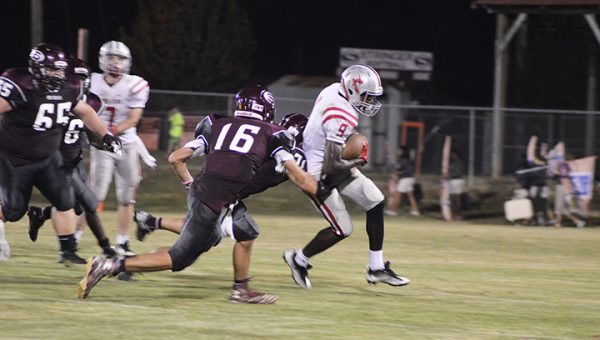 Eight points can make a world of a difference in high school football.

Right now, no team knows that more than Loyd Star. The Hornets, with a tough 31-30 loss to the Stringer Red Devils Friday, have now lost three of their last four games by a combined eight points.

With the loss, the Hornets fall to 2-4 on the season. Coach Adam Cook’s crew seemed to be out of their road contest early on as they entered halftime with a 31-8 disadvantage.

As each school’s band entertained spectators, Cook gave a fiery speech to his squad. The head coach said he implored them not to concede the game without a fight.

“I told them, ‘Don’t walk out of this door if you don’t think we will win,” he said. “We didn’t change a thing. I just told them they have to do their job.”

His team clearly took his words to heart, because a different team took the field for the second half of what had been a lopsided affair.

The Hornets scored 22 unanswered points to storm back into the contest, but a few missed opportunities cost them down the stretch in their comeback bid.

Turnovers have been a constant for the Hornets in many of their games this season and remained so in their loss to the Red Devils.

Loyd Star ended the  first half with four turnovers, but was able to turn the table after halftime and force three of their own.

Stringer’s Anthony Thomas entered the game after putting on a show against Bogue Chitto last week and he was able to do much of the same Friday night with three touchdowns.

“Thomas hurt us. He plays with great effort and you can’t measure that. He is a tremendous player and one of the best we have seen tthis point in the season.”

The Hornets put themselves in prime position to win the game late, but were unable to seal the deal.
After crossing the goal line to make the score 31-30, Loyd Star was able to recover a fumble by the Red Devils on the ensuing kickoff.

The Hornets gained possession on the 40, but their offense took a huge blow when Patrick Price went down with an ankle injury. He would not return to the game.

Loyd Star had around four minutes left on the clock at the time, but stalled on the drive without their leading rusher.

Primetime 23 selection James Beard had another gem of a game in the loss as well. He put on one of his better showings on special teams, as he finished the night with 125 punt return yards.

Beard took a punt return into the endzone  and caught a 19-yard touchdown from Parker Flowers  Friday as well.

Out of the backfield, Price led the way with 17 carries for 85 yards.  Zac Arnold contributed 65 yards on 12 touches, while Flowers added 39 yards rushing.

Coach Cook said he still has confidence in his team after the loss. If anything, he said their effort should show teams they are not to be taken lightly.

“I told them if you can play the rest of the year like the second half of this game, we can salvage the season.  We are really close. We just have to get over the hump,” he said.

Loyd Star’s opponent even acknowledged the effort they expended in the game. Cook said the Red Devils’ head coach as well as the team applauded his squad for fighting back from what seemed to be an insurmountable deficit.

The showing from the community at the road game was admirable, too.

“We had more people at the ball game than the home team did, so I am really proud of our community and how well we travel. I’m thrilled to see the support and truly blessed to behave the opportunity to coach here,” Cook said.

The Hornets open district play this week when they face Amite County at home. Kickoff is set for 7 p.m.