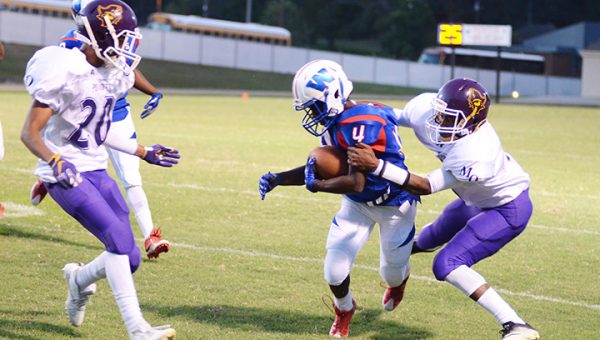 Photo by Anthony McDougle/ Wesson’s Jermaine James tries to shake off a Mount Olive defender in the first half of the Cobras’ homecoming game Friday night.

Queen Lacie Tarver and her court ruled over homecoming festivities in Wesson Friday night, and the Cobras took the win against the Mount Olive Pirates 21-12.

“This was definitely not our best game, but we found a way to win,”  head coach Jeremy Loy said. “I put a lot of that on myself. A win on homecoming is always a good thing though and we will take it. I need to do a better job of getting us prepared. Defensively, we made stops in the red zone and I am proud to see that. Some big plays were made by Dell Thigpen and Will Hulon to help us pull it out on offense.”

Wesson put up its first points of the night rather quickly when Thigpen ran 15 yards to the end zone to give his team a 7-0 lead.

Led by Paris Fairley, Mount Olive gained  chunks of yardage on the ground on  the ensuing possession.

They ended up in the endzone via a run from a few yards out by Fairley. Mount Olive went for the two-point conversion, but failed and remained behind in the contest 7-6.

Thigpen gained three  first downs on the Cobras’ next scoring drive, taking the ball to the Pirates’ 14 yard line. A few plays later, Thigpen took the ball in  for his second touchdown of the night and gave Wesson a 14-6 advantage. Mount Olive tried to rally back and ended the first quarter with three first downs.

The Pirates continued their offensive drive in the second quarter and got to the Cobras’ 25 yard line. Mount Olive went for it  on fourth down, but  Wesson lineman Joseph Carraway stopped Latravious McNair from crossing the goal line.

After a defensive stand that led to a punt the Pirates returned the ball to their 28 yard line and worked their way into Cobra territory.

McNair went for a pass, but defensive back Brian Thomas made an interception. The Cobras were making progress on their drive after the pick, but fumbled the ball.

Mount Olive’s Deshaun Price recovered with 44 seconds on the clock, and the Cobras’ defense held the Pirates to end the first half with 14-6 on the scoreboard.

The Pirates started the third quarter receiving and owned most of the quarter offensively with four first downs.
They reached the red zone with carries by Fairley and passes to Tyus Norwood.

Mount Olive ended up on the one yard line, where McNair slipped into the end zone to  register six more points for the Pirates.

They attempted another two-point conversion, but were unsuccessful, making the score 21-12.

The Cobras took control with two big runs by Thigpen to put Wesson in scoring position on the Pirates’ 27 yard line, but a pass was intercepted by McNair to give Mount Olive possession on their own 12 yard line.

The Pirates struggled with penalties and incomplete passes and then fumbled on their own 28 yard line. The fumble was recovered by Carraway to return possession to Wesson.

The Cobras couldn’t get their offense going, but still ended the third quarter in the lead with a score of 14-12.

In the fourth quarter, the Pirates turned the ball over on downs on the Cobra 28.

The Cobras made a huge play when Burns passed the ball off to Thigpen who then completed a pass to Hulon for a 73-yard touchdown. Craft made the extra point to increase Wesson’s lead to 21-12.

Both teams battled for the remainder of the game and time ran out with the Pirates on the Cobras 5 yard line.

Burns finished the night with 52 passing yards and one interception.

Thigpen led all rushers with 14 carries for 159 yards and two touchdowns.
Hulon led the receivers with two catches for 96 yards and one score.

The defense was led by 15 total tackles and an interception from Jerry Barlow. Bobby Pritchard had 12 tackles, while Chamar Martin added 11 tackles and two for a loss.

The Wesson Cobras will host the Hazlehurst Indians Friday, with kickoff set for 7 p.m.