Brookhaven Little Theatre brings ‘To Kill a Mockingbird’ to life 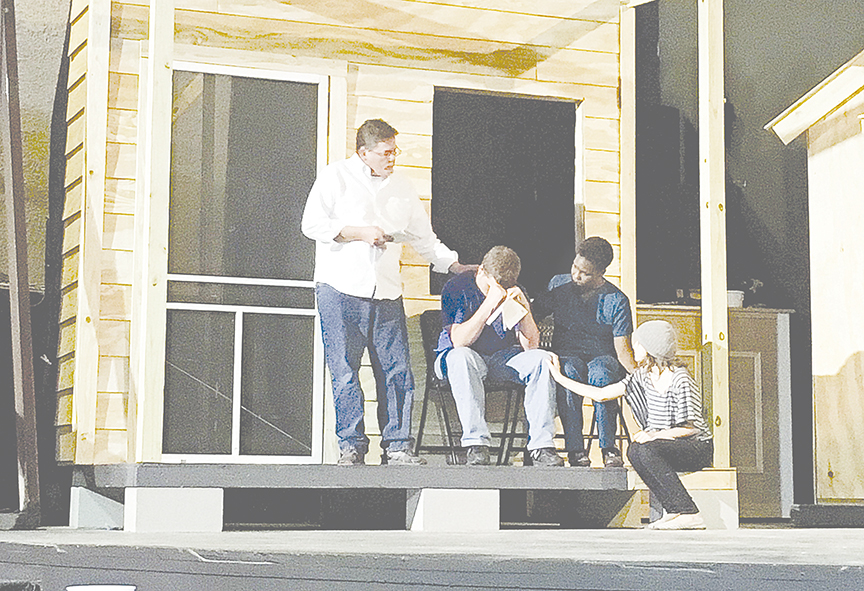 Photo submitted/Larry Baker (left) practices a scene from the Brookhaven Little Theatre’s production of Harper Lee’s “To Kill a Mockingbird” with Gage Beard, Zetonnia Ferguson and Cadence Laird. Tickets for the play start at $15.
All of the actors were recently practicing for the upcoming play.

Brookhaven Little Theatre plans to take its audience back in time when the future of the nation hung in the balance.

The theatre will present Harper Lee’s Pulitzer Prize-winning novel “To Kill a Mockingbird” as an adapted play Oct. 6-9 and 14-16. Showtime Thursday, Friday and Saturday are at 7:30 p.m. and with a Sunday matinee at 2 p.m. Tickets are $15 or $20, depending on the seats chosen.

According to the BLT Facebook page, the play contains adult themes and strong language and is appropriate for ages 12 and up.

Director Trey Waterloo said the play will showcase the talent of more than 20 area actors, including six junior high and high school students.

“We have a really fabulous set for the actors to work with, and an extremely diverse cast,” Waterloo said.

The novel, originally published in 1960, follows the journey of Jem and Scout Finch as their father defends a man framed for a crime he did not commit. It deals with serious issues of rape and racial inequality.

“The true spirit of the play will be intact,” he said.

He began preparing to direct the play in January and production began in July.

“The actors have spent approximately 20 hours a week on stage since July,” he said. “And the same amount of time was taken to build the set.”

He chose “To Kill a Mockingbird” in hopes that it would be a cornerstone for Brookhaven’s community theatre.

“It is one of those stories that you grew up with, and I’ve wanted to see it performed at the theatre for a while,” he said. “It also seemed timely to bring it to stage after Harper Lee’s death last year.”

Because of the racial tension in the United States today, he also felt the production would allow the community a chance to see how the play’s characters dealt with the divide during the Great Depression.

“With some of the racial tension going on throughout our country, this play provides a good time to reflect on some of the challenges we still have with racial relations, but also see how far we have come,” he said.

One of the challenges the actors had was learning how to portray the divide and how they overcame it accurately.

“The kids playing these parts and even most of the adults were not a part of that generation,” he said. “The play is set in 1935. There were several times where we had to discuss how the characters were processing what was going on. It was one of those plays that really brought the old south racial interpretation to light.”

Waterloo and his wife, Emily Waterloo, a BLT board member, both agreed that the upcoming play will be one of the best the theatre has ever produced.

“We’re using some different techniques with lighting and sound that we’ve never used before,” he said. “We’re using a cyclorama to set temperature of the stage based on the time of the day in the play. I can’t recall the last time we’ve had this many people miked. Hearing the actors will not be an issue during this play.”

In addition to the new technology, one of the most unique aspects of this play will be the three acts.

“Since it is a three-act play, we will have two 10-minute intermissions,” he said.

Emily Waterloo said she has never seen so many people in the community schedule activities to correlate with a play the theatre is producing.

“This is the first time ever that we will host students from area schools for their own showing of a BLT play,” she said. “We plan to have more than 600 students from Brookhaven High School, Enterprise, Loyd Star and Brookhaven Academy come to a special showing on Oct. 7.”

Since “To Kill a Mockingbird” is required reading for many of the schools, she said it will be an exciting experience for the students to see the novel come to life in play form.

“We also have 55 educators attending a conference at Co-Lin coming on opening night,” she said. “A local book club specifically read the novel so they could come see the play. The Presbyterian Church created a bible study that correlates with the book. People in the community are doing neat things that time into the show, creating a lot of excitement among different ages.”

Tickets for the play can be purchased online at brookhavenlittletheatre.com, through a link on the BLT Facebook page or by calling the BLT box office at 601-990-2243.

At least seven homeowners on Hurricane Lake Drive woke up earlier this week to find their mailboxes had been destroyed.... read more