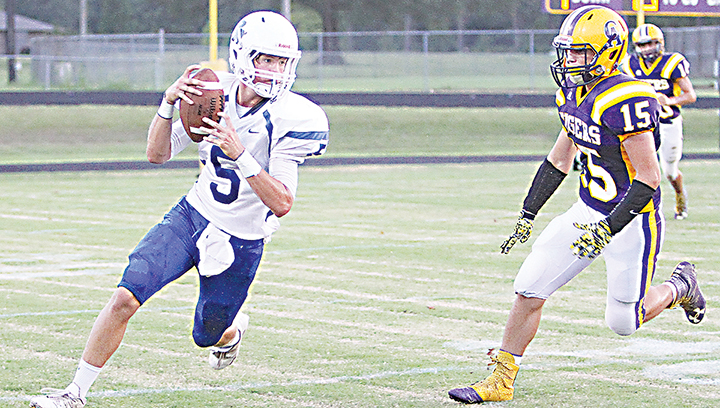 Photo by Sherylyn Evans/Brookhaven Academy’s Fisher Warren will have his number called several times tonight as the Cougars search for their first win of 2016.

The second half of the season, the half that holds the most weight, is fully underway and football fans far and wide in the Lincoln County area are in for an interesting Friday night.

Of the seven schools in the coverage area, five will be playing within the confines of their home fields. That may initially be reassuring, but a glance at the matchups might change that.

With these squads facing such stout competition, it will take solid performances from their key role players to come out with a “W.” That won’t be enough to get the job done, though. Certain units for each team will have to step up in a major way to give its team the best chance to win.

The Panthers put people on notice last week by making short work of a decent South Jones team. If they really want to open some eyes though, they need to win their home contest against the reigning 5A champion Wayne County War Eagles tonight. The Eagles lost a great deal of starters from that championship team and have struggled to a 1-4 record on the year.

They proved they are still to be respected last week by defeating the previously unbeaten Wingfield Falcons by 30 points.

For Ole Brook to win against the Eagles, the defensive line must show up. Wayne County is a high-volume run team, but their offensive line has shown signs of weakness this year.

Jeffrey Johnson and the other big guys may not fully neutralize the run game, but they will do enough to get out of this district game with a win.

As unfair as it may or may not be, the Wesson Cobras’ game against the Hazlehurst Indians (5-0) was tallied as a loss by many sports pundits before the season.

Wesson is 4-2 on the season and looking to prove the doubters wrong with a statement victory at home, but they face an uphill battle. To even have an inkling of a chance of beating such a juggernaut, their entire team will need to play a virtually perfect game.

More specifically, the linebacker corps has to make an impact. Hazlehurst has a deadly run game spearheaded by Malik Gray and a solid offensive line headlined by Primetime 23 player Shauntavis Vardaman. Chamar Martin, Jerry Barlow and company will make plays, but not enough.

The situation is a bit different for Loyd Star as they face Amite County this week. At 2-4, both teams will be looking for a win to jumpstart the second half of their season.

The Hornets have lost a lot of close games this year, mostly because of turnover issues. Parker Flowers, James Beard, Patrick Price and the other skill guys make plays. That is not the issue. Regardless, if they do not hold on to the ball and sustain drives then they will be adding another loss to their record.

I’m remaining confident in my sleeper team and saying that they will get the fumbles and interceptions in check tonight in a close win.

The 3-2 Yellow Jackets are one of the few teams to hit the road tonight. A tough Prentiss (4-2) awaits them at the end of their journey.

The Bulldogs took to the air to get the best of Lawrence County in a win. I expect them to do much of the same against a team that has not been truly tested by an aerial attack that is led by quarterback Jalen Madison.

Prentiss wide receiver Ronald Baker had 178 yards and two scores against the Cougars and his number is sure to be called at home. In a tough environment, and facing a duo like Madison and Baker, the Jackets will struggle.

Charlie Jackson’s Bears are easily facing the toughest opponent this weekend as Bassfield rolls into town to open district play.

The Bassfield Yellowjackets are traditionally known for two things: a good running game and a stout defense. The Bears have had issues on the offensive line this year that they can’t afford to have against a team of this caliber.

Bassfield will find a way to exploit the deficiencies of West Lincoln and win easily.

The Bobcats head to face the Mount Olive Pirates (2-4) still in search of their first win.

In order to get it they must find a way to stop Mount Olive on the ground. Running back Paris Fairley and quarterback Latravious McNair are a deadly one-two punch that must be accounted for. So, the Bobcats’ defensive line must do its part to create gaps for Sherman Jackson and others to make plays.

The Bobcats stopping Fairley is not something I am betting that will happen tonight.

It is easy to pick out a unit that needs to perform highly when its players take the field on only one side of the ball. However, that is not the case for the winless BA Cougars. When they take the field against Parklane (4-2) for homecoming, they will be fielding 14 players at the most.

With that in mind, everyone will have to do their part to get the Cougars their first win. There’s no doubt the kids at BA will give their all tonight, but head coach Ron Rushing and his team will still be looking for their first win going into next week.

Photo by Amy Rhoads /A Co-Lin defender wraps up East Central’s running back during the teams’ game Thursday night in... read more