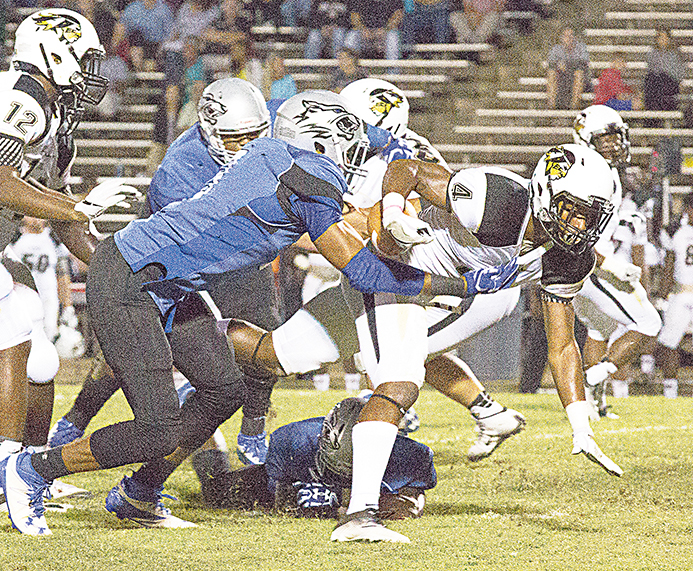 Photo by Amy Rhoads /A Co-Lin defender wraps up East Central’s running back during the teams’ game Thursday night in Wesson.

First, he threw a 55-yard touchdown pass to Alexander Hollins in the fourth quarter to make the score 23-14.

Then, with the Warriors still in the lead, he made his way to the sideline and addressed defensive end Montez Sweat.

“He walked over to me on the sideline and said for me to bring the game home. After that I was just like, ‘Let’s do it,’” he said. “So, I told the defense, ‘Let’s buckle down and finish this game,’ and I went out and made plays.”

After that exchange between the two, the difference was evident in the Mississippi State commit Sweat and the rest of the Wolfpack defense.

The unit forced Dom Marino into four interceptions in the fourth quarter and helped initiate what amounted to a 27-point swing in the Wolves’ favor that would propel them to victory.

Sweat played like a man possessed the rest of the game, batting down passes, making tackles and returning an interception 12 yards for a touchdown to give the Wolves their first lead of the game.

Nelson did his part as well. The explosive athlete added a 63-yard punt return to make the score 23-21. He finished the night with 148 all-purpose yards to give Co-Lin the late spark it needed, and the defense did the rest.

The speedster was quick to pass off his success and credit his teammates for setting great blocks and making plays, too.

“That’s all on my teammates. They keep me up,” Nelson said. “Big players make plays and that’s what I try to do for my team. When my number is called, I am going to be ready to make plays.”

Before an unbelievable fourth quarter, things seemed bleak for the Wolves. East Central scored the only points of the first quarter when Marino found Kalen Meggs for a 38-yard touchdown pass.

Co-Lin quarterback Dominic DeLira answered with a 17-yard strike to Ryan Drew, but the Warriors responded with a touchdown run by Dwyane Barnett and a field goal to take a 17-7 lead into the half.

Both defenses stood tall in the third quarter, but Co-Lin truly rose to the occasion in the decisive final quarter.

After surrendering a 30-yard touchdown catch to Antonio Gibson with 13:12 in the quarter, Nelson scored his two touchdowns to give the Wolfpack the momentum.

Then, Sweat made what was likely the play of the game, the aforementioned one-handed pick-six.

“I was just coming off the edge, the tackle tried to cut block, but it was something we had been told to be ready for,” he said. “I beat it, put my hand up to block the pass and ended up coming down with the ball.”

Sweat would later be ejected for targeting, but his team held down the fort. Defensive back Isaiah Swopes stole the show the rest of the night. He caught two interceptions and returned one 55 yards for the game’s final score.

DeLira finished the game with 92 passing yards and one touchdown. Co-Lin running back Ladarius Galloway had 63 yards on 17 carries. Hollins led all receivers with two catches, 62 yards and a score.

Head coach Glenn Davis said he would take the win, despite it not coming the way he may have hoped.

“Offensively we have to get some things going. We have to run the ball better, but I thought we were better in the redzone tonight than we were last week. ,” he said.

The Wolves will hit the road to face Hinds Community College next week. Kickoff is set for 6:30 p.m.

Submitted photo/Co-Lin defensive back Rhoy Williams wraps up a JCJC runner in their game last week. The Wolves will face... read more