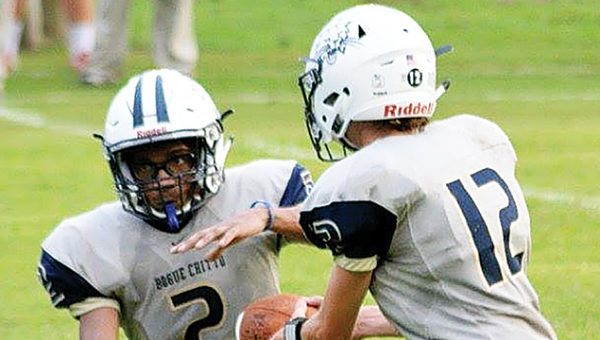 Photo by Stacy Leake/
Quarterback Trey Nettles hands off to running back Demarcus Godbolt during their game against Mount Olive Friday.

Bogue Chitto fans will have to wait one more week to see if their team can get a victory in 2016.

The Bobcats moved to 0-7 on the year and 0-2 in district play with a 40-6 loss on the road to the Mount Olive Pirates.

In the loss turnovers were an issue for the Bobcats. They finished the night with four interceptions and two fumbles. That is something head coach Gareth Sartin says his team must work to improve moving forward.

“We hurt ourselves with turnovers. We had opportunities to score and we weren’t able to get the ball into the endzone.”
Bogue Chitto also had their hands full with the deadly run game of the Pirates. Led by the duo, Mount Olive finished the game with 287 yards rushing on only 47 carries.

The Pirates were able to get it done through the air against the Bobcats as well. They completed only five of their eight passing attempts, but those five went for 125 yards.

“Our effort was really good and we played hard,” Sartin said after the game. “We just have to finish drives. We moved the ball well we just couldn’t get anything out of it.”

Even in the loss, Sartin said he was happy with the performance of his offense. The unit showed some balance against Mount Olive and finished the game with 140 rushing yards and 150 passing yards. Dee Dillon led all receivers with four catches for 62 yards and one touchdown. Running back Lafredrick Dillon led  all Bobcat rushers with 42 yards on six carries.

“The score sounds worse than the way we played,” Sartin said. “We just want to continue to improve. We are a young team but some of our young guys are starting to play better.”

The Bobcats have their bye week this week before resuming district play against Lumberton on the road.