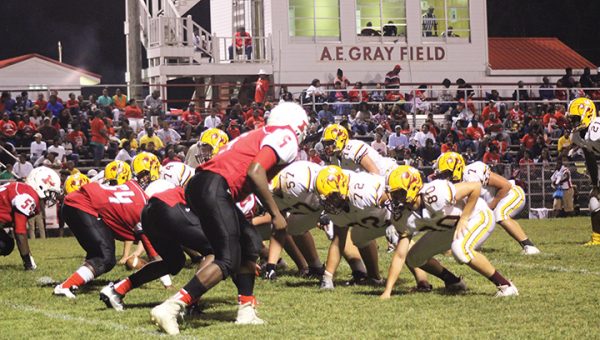 Photo by Christy Boyte/
The Prentiss defense digs in and awaits the snap from the Enterprise Yellow Jackets during their district game Friday night.

Enterprise traveled to Prentiss for its first district contest of the season against the Bulldogs Friday.

The Yellow Jackets went in hoping for their first district win, but the Bulldogs held them to only six points in the contest and cruised to a 40-6 victory.

Early on, the Bulldogs’ passing game appeared to be too much for Enterprise to handle. Prentiss quarterback Jaylen Madison completed pass after pass to march them downfield during drives.

Prentiss jumped on the Yellow Jackets quickly in the game and built a comfortable lead for themselves.

They scored six touchdowns in the first half  to leave the Jackets trailing 38-0 at halftime.
The Enterprise defense came back strong in the second half, denying the Bulldogs the opportunity to get into the end zone.

However, the short return pinned the visiting team too close to the goal line, and they were pushed back for a safety to bring the score to 40-0.

As the Jackets fought to keep Prentiss from getting a shutout, Tanner Waldrop broke free on an impressive 55-yard touchdown run to finally put Enterprise on the scoreboard with 4:14 left in the fourth quarter.

Cody Leggett attempted the two-point conversion, but was met by a host of Bulldogs. The Bulldogs came out on top at their homecoming with a final score of 40-6.
Leading the Jackets rushing was Waldrop with 55 yards.

Marvin Butler was not far behind with 48 yards rushing and Darren Richardson contributed 43 yards to the ground game.
Enterprise finished the night with a total of 154 yards rushing.

Leading the way defensively for the Yellow Jackets were Drake Allen and Tailor Young, finishing with six tackles each. Austin Boyte tallied five tackles. Boyte and Young also sacked the quarterback for a loss of seven yards.

Coach Brooks Burns said he was proud of how his guys executed what they had worked on this week.

“They all played hard. They were more physical the second half,” Burns said.

The Enterprise Yellow Jackets will have another road trip in district play this week when they travel to Bassfield to battle the Yellowjackets. Kickoff for that contest is set for 7 p.m.