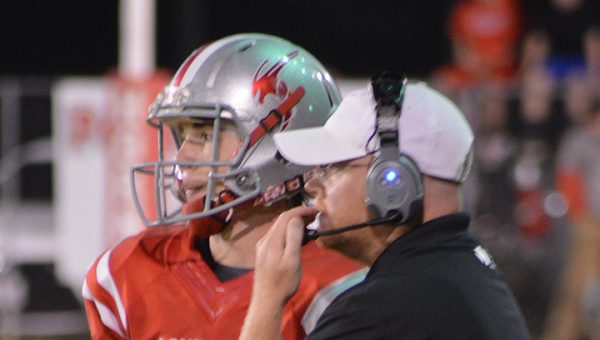 Photo by Lydia King/
Hornets’ head coach Adam Cook and Parker Flowers confer during a break in the action against Amite County Friday.

The Hornets fixed their turnover problems, but were unable to outlast the Trojans and fell by a final score of 36-34.

The Hornets’ defense seemed to have the Trojans’ number early in the game, forcing the Trojans to punt the ball away on a fourth and long. It looked like the Trojans defense would return the favor, however, an offsides penalty allowed the Hornets to replay their third down.

With eight minutes in the quarter, Zac Arnold burst lose for a 57-yard touchdown. The Hornets took a 8-0 lead after converting the two-point attempt.
The Trojans quickly responded with a 70-yard passing touchdown from Trevarious Clark to Chris Bell. The Trojans went for the two-point conversion but failed, which made the score 8-6.

Amite County seemed to find the endzone again through the air not long after that. However, a holding penalty against them  would take the score off the board.The

Hornets were able to cause a fumble on third and long, which Konner Allen recovered.
With 3:16 left in the quarter, James Beard broke a few tackles en route to a 40-yard rushing touchdown.

The Hornets took a 16-8 lead into the second quarter after converting the two-point attempt.

The Hornets picked up where they left off in the first, as Parker Flowers scored on a one-yard quarterback sneak. This time, Loyd Star was unable to convert the two-pointer but still maintained a 22-8 lead.

With 4:37 left in the half, the Trojans found themselves facing a fourth and 25.

Their decision to go for it paid off and they found the end zone on a 45-yard rush by Lantravious Franklin.

With time winding down, the Trojans scored again on a 50-yard pass from Clark to Bell. With that, Loyd Star would take a slim 22-20 lead into halftime.
Loyd Star wasted no time to start the third quarter, as Michael Harvey was able to speed past Amite County defenders for a 50-yard touchdown, to give his team a 28-20 lead.

Amite County reached the endzone soon after as Bobby Woodard ran in for a seven-yard touchdown.

With 2:42 left in the third, Harvey once again sped past the Trojan defense and scored on a 14-yard run, with. Loyd Star elected to go for the two-point conversion but could not convert. Down 34-28  with time expiring in the third quarter, Clark scored on a one-yard run and the Trojans converted the two-point try to make the score 34-36 in their favor.

Early in the fourth quarter, the Hornets managed to force the Trojans to fumble again. Allen recovered the ball for his second fumble recovery of the night.
With 2:24 left in the game, the Trojans faced a fourth and short. They decided to go for it, but were halted by Loyd Star.

The Hornets started to march down the field for their comeback attempt, but came up short as time expired.

“I’m proud of the guys ‘for continuing to work throughout the game. Tonight was the best we’ve passed the ball all year long. It’s good to be a balanced team, but we still have a few things we need to work on,” Trojans’ head coach Sedric Cane said.

“Proud of the guys effort, but we need to find the extra gear. We need to get over the hump. We’re so close to being a great team. It’s heartbreaking to lose these close games,” Hornets’ coach Adam Cook said after the game.

Loyd Star (2-5, 0-1) will continue division play as they host the Prentiss Bulldogs Friday. Kick off is slated for 7 p.m.

Photo by Christy Boyte/ The Prentiss defense digs in and awaits the snap from the Enterprise Yellow Jackets during their... read more