Rushing and the Cougars looking ahead to bigger picture 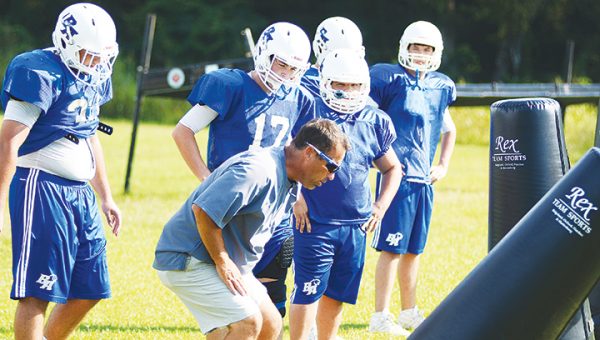 Photo by Anthony McDougle/
Brookhaven Academy head coach Ron Rushing explains a drill to some Cougar lineman during a practice.

In football, in any sport for that matter, all that fans and the media seem to care about is winning.

We glorify the teams that excel, while debating the reasons why losing teams could be struggling. So, when spectators, members of the media and others see the

Brookhaven Academy Cougars, a team in the midst of a 20-game losing streak, they probably dismiss them as another squad gasping for breath.
That is not the case.

Walking into the newly-renovated locker rooms, speaking with new head coach Ron Rushing and his team and examining their demeanor might confuse a gumshoe reporter. That is because the Cougars and their head coach don’t carry themselves like a team that has not won a game in two seasons.

No, instead that reporter would see 14 smiling, cheerful and optimistic players’ faces ready to take the field and give their full effort.

Connor Griffin, a senior on the Cougars’ football team, is one of its leaders and usually one of the first faces one would recognize. He is one of BA’s best defensive players, usually racking up about eight tackles a night.

He stands at 5-foot-11, 170 pounds and plays several positions, even offensive lineman.
Griffin’s impact on and off the field could never be relegated to one position, though, and it is clear upon speaking with him that he is the soul of the team. His tale is one of true inspiration.

At the age of 5, an MRI revealed Griffin had a tumor on his spine. Doctors in Memphis told his family it was intertwined with young Connor’s spinal chord. It could be removed, but doctors informed the family that he ran a risk of never walking again after the surgery.

Griffin defied those odds and was walking on his own three days after being confined to his bed.
In a word, the young man is a fighter.

Rushing has coached some great teams over the years, and the head coach says Griffin could start on any one.

“It’s different when you play for somebody that you want to play for. I don’t think there is another coach in the state that we would rather play for,” he said. “We know he’s got our backs.”

Griffin said he hears a lot of comments from bystanders, but it does not bother him.

“These teams may be bigger than us but we are one of the toughest group of guys you will meet,” the senior said. “I think if you take any other school, and give them 14 kids and tell them to stick with it, they wouldn’t be able to.”

He admitted that losing is tough, but said he also realizes that he and the rest of his team must lay the foundation for the success the Cougar faithful are accustomed to and deserve. It starts, Griffin said, by playing hard every game and by being role models for the younger kids.

“A lot of the kids at these games won’t remember that we lost by 20 or whatever. They only see a football player,” he said. “So, it is important that they see us fighting every night.”

Sure, most nights they are facing teams that are bigger and more talented. Sure, by fielding only fourteen players they face a mammoth obstacle every Friday night.
Those are not factors that concern Rushing or his players because they see the bigger picture.

Look back only four years ago and you would find Brookhaven Academy atop the AA classification of the Mississippi Association of Independent Schools. The years that followed have proven to be grueling for the Cougars, as they have not won more than five games in a season since their championship campaign.

Winning was something Rushing had become accustomed to during his time at Cathedral, where he went 60-17 in six years and won a state championship.

When he took the job here, that tradition was something he was well aware of. He assured that he would bring that success back.

“It’s going to happen here. I don’t know how fast, but it will and we are getting closer every day,” he said.

The new head coach stressed that key aspect of the process would be patience on the part of the whole Cougar family. After all, success does not happen overnight, it must be built.

“Kids like Connor make it easy,” he said. “He’s tough, has a great mindset and he’s always smiling.”

Rushing said his entire team amazes him every day.

“They go out every night and play hard. They go to every practice and play hard because they realize they are building a foundation. Some of that does come from Connor.

His attitude rus off on everyone,” he said.

So, when the Cougars return to the heights they once reached, remember the struggles and the tumultuous years if you will. But, along with those times remember Ron Rushing.

Remember Griffin,  Madison Smith, Fisher Warren, Christian  Huffman and the rest of this team.
Because without their willingness to preserve and endure, success would never be possible.

Photo by Sherylyn Evans/Brookhaven Academy’s Fisher Warren will have his number called several times tonight as the Cougars search for... read more