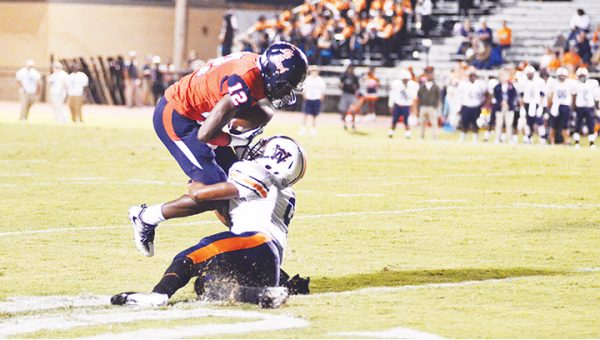 Photo by Anthony McDougle/
Brookhaven wide receiver John Hilbert is wrapped up by a Wayne County defensive back. Hilbert had four catches for 34 yards in the Panthers’ 31-16 loss Friday night.

When Ole Brook suffered its first loss of the season to Northwest Rankin, they were plagued by turnovers and other errors.

The Panthers were haunted by the same ghosts at King Field Friday night, as the Wayne County War Eagles forced four turnovers en route to toppling the Panthers 31-16.

“This game was real simple,” head coach Tommy Clopton said. “We can’t turn the ball over, blow assignments or give up big plays. We have to learn to execute at a higher level in big ball games if we are going to win them.”

Wayne County head coach Todd Mangum said the adjustments his coaching staff made played a big part in the win.

“The coaches made adjustments, but the kids were able to make plays after those adjustments were made. It’s so fun to see the maturation process of where we were, to where we are now. We just need to keep getting better,” Mangum said.

The home team came out with a ton of intensity and early indications suggested the game may come down to the wire.

They were the first on the board, as Sevante Quinn connected with wide receiver Zarian Harper from about 10 yards out to make the score 7-0. The Eagles managed to respond when running back Schdarious Chambers took a handoff around the right side of the Ole Brook defense and outran the defense for a long touchdown run. Wayne County tied the game at 7 after the extra point attempt was successful.

The rest of the quarter was a defensive struggle, as the teams exchanged turnovers. The Eagles’ defense forced a fumble, but Ole Brook’s standout defensive back J.J.

Jones caught an interception to return possession to his team. The Panthers’ Tyler Mixon would send a field goal through the uprights in the waning moments of the first quarter to give Brookhaven a 10-7 lead.

The tide turned the remainder of the game, as the Panthers were only able to score six points over the next three quarters. Ole Brook did sustain a long drive in the third quarter, but a Quinn pass inside the red zone was picked off by Wayne County’s Jamarcus Fischer and returned for a touchdown.

They nailed a field goal later in the quarter to take a 17-10 lead into the half.

The Panthers’ reached the endzone in the third via a long touchdown run by sophomore speedster Don Blandon, but Mixon missed the extra point attempt to make the score 17-16. Perhaps sensing their backs were against the wall, the Eagles imposed their will with a stout running game.

Despite the loss, the Panthers did some good things on both sides of the ball. They finished with 473 yards of total offense. Kenneth Dixon led all rushers with 15 carries for 106 yards, while Demarrell Leggett and Quinn had 80 and 50 yards respectively.

Quinn went 21-of-36 with 219 yards and two scores, but also threw three costly interceptions in the losing effort. Blandon, his primary target in the game, had eight catches for 107 yards and one touchdown. Harper had six catches for 54 yards and a score.

The Ole Brook defense was led by five tackles from Isaiah Wall and Wesley Calcote.

“Our kids played hard and I thought we had a chance to be in control of the ball game. Hats off to Wayne County, they played really hard. We have to bounce back on a short week and get ready for Provine,” Clopton said.

Photo by Lydia King/ Hornets’ head coach Adam Cook and Parker Flowers confer during a break in the action against... read more