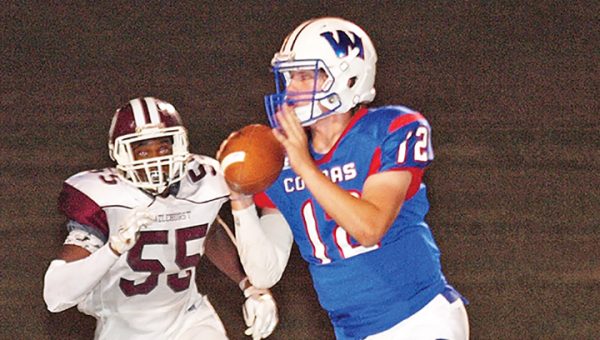 The Wesson Cobras faced the Hazlehurst Indians Friday night for the first district game of the season.

The Cobras’ defense struggled with the quick maneuvering of the Indians’ offense and the night ended with a final score of 58-21 in favor of the Indians.

The Indians started the night receiving. Tim Steward carried the ball downfield and quarterback Quamead Stewart connected with receiver Jaquaveon Tillman to move the ball to the Cobras one yard line.

Hazlehurst went for the touchdown, but Joseph Carraway pushed them back for a loss.  On the next play, Stewart sneaked into the end zone  to put the first points on the board.

Malik Gray attempted the two point conversion, but was unsuccessful, making the score to 6-0 for Hazlehurst.  The Cobras’ first attempt at offense ended with a punt from their own 40 yard line and the Indians took over on their 25.

Dell Thigpen intercepted a pass  to put the Cobras back on offense but Wesson ended up turning the ball back over to the Indians on downs. The teams battled for the rest of the quarter and the score stood at 6-0 for the Indians.

The Indians dominated in the second quarter with back-to-back touchdowns. Stewart connected with Tillman for an 18-yard touchdown pass and Tillman also made the two-point conversion.

On the Indians’ next possession, Gray took a handoff in for a score from 30 yards out.

Hazlehurst completed the two-point conversion to go up 22-0.

The Cobras came back strong on their next possession with Trey Glasper breaking off a 45-yard rush to get into Indian territory.
Penalties against the Indians moved the Cobras to the 28-yard line and quarterback Peyton Burns completed a pass to Will Hulon for the Cobras’ first score of the night.

Matthew Craft converted the extra point to make the score 22-7.

The Indians received the ensuing kickoff deep in their own territory, but ran the ball about 60 yards to get a first down on the Cobras’ 20.
Stewart then completed a pass to Gray for his second touchdown of the night.  After getting the two-point conversion, the Indians went up 30-7.

The Cobras took over, but their possession was abruptly ended.
Steward intercepted a pass to place Hazlehurst’s offense on their 27 yard line.

From there, quarterback Stewart ran the ball in for a touchdown and then completed a pass to Wykeen Craft for the two-point attempt to end the first half with a score of 38-7.

The Cobras started the third quarter with the ball, but turned it over on downs on the Indians’ 39.  Hazlehurst made it to the 50 when Cobra Chamar Martin recovered a fumble to put Wesson in control on the Indian 46 yard line.

The Indians responded when Julius Brown intercepted a pass from Burns and took it to the 32 yard line.

Stewart rushed about 30 yards for a first down, then gained more yardage by completing passes to Gray and Tillman. Jahem James ran the ball into the endzone from two yards out.  A succesful two-point try made the score 46-7 at the end of the third quarter.

James made his second touchdown with 10:27 left in the game by scoring on a 16-yard scamper.  The two point conversion was unsuccessful and the Cobras took over on 38 yard line after the kickoff.

Wesson’s JaQuavian Harris  capped the drive with a score and Craft’s extra point was good to cut the Cobras’ deficit to 46-14 .
The Indians punted on fourth down on their next drive and the Cobras took over on Hazlehurst’s 44.

Harris would rush for his second touchdown of the night to end the drive. After  a succesful extra point, the  Cobras trailed 46-21.

Tyrek Price ended the game with a touchdown to put the final score at 58-21 in the Indians’ favor.

“We ran into a very good Hazlehurst team that is top-ranked in 3A for a good reason,” head coach Jeremy Loy said. “We are a young team and hopefully we learned some valuable lessons that will help us moving forward.”

The Wesson Cobras will travel to Port Gibson to face the Blue Wave Friday night, Oct. 7 at 7 p.m.

Rushing and the Cougars looking ahead to bigger picture