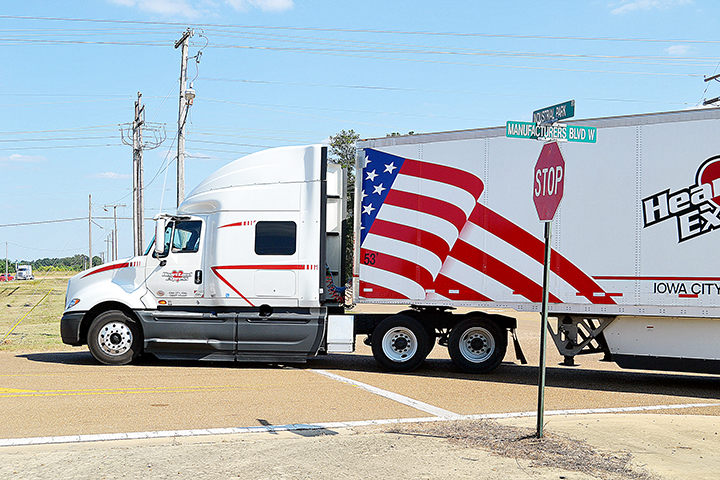 The Brookhaven Industrial Park is one step closer to having new roads.

The Lincoln County Board of Supervisors selected Dungan Engineering as the firm they would like to use for the industrial park’s repaving project at their meeting Monday.

“That infrastructure was going to have to be repaired sooner or later,” Garrick Combs, executive director of the Brookhaven-Lincoln County Industrial Development Foundation and the Chamber of Commerce, said. “It saved us $1.25 million on a project we were going to have to do, so that’s great news.”

The gap between the total project cost and the grant will be split between Brookhaven and Lincoln County, he said.

“All the praise should be given to the county and city officials in cooperating in order to get this done,” he said.

Once Ryan Holmes, an engineer with Dungan, exited the board room, the supervisors — excluding District 5 Supervisor Doug Falvey, who was out for a family matter — scored each of the two companies who bid on the project based on qualifications, experience and capacity.

When the numbers were tallied, Dungan Engineering received the top score.

The Brookhaven Industrial Park houses at least six businesses with about 1,500 direct jobs and 340 commercial truckloads a day, he said.

U.S. Senator Thad Cochran (R-Miss.), chairman of the Senate Appropriations Committee, announced eight Delta Regional Authority grants back in August. When combined with nonfederal contributions, the grants awarded will result in more than a $14.8 million investment in eight Mississippi communities.

“We are very thankful to Sen. Cochran for the funding for the infrastructure of our industrial park,” Lincoln County Chancery Clerk Tillmon Bishop said when the grant was announced. “We were going to have to do it one way or the other, so it’s a good thing. He really stepped up to the plate for this community and helped us to make it happen.”

Approximately 2.6 miles of industrial park access roads will be resurfaced with hot mix asphalt, said Holmes. The project will also include strengthening of roadway shoulders for truck parking.

“They’re in desperate need of it,” Bishop said.

According to Bishop, the county and the city will each put up about $700,000. The county acquired their share through a short-term loan.

• The board approved the audit numbers for the East Lincoln, Heucks Retreat, Ruth and Zetus volunteer fire departments, stating that the departments are in good financial standing.

• The board approved a solid waste fund refund of $28.

• The board approved a resolution discussed at a previous meeting for the wastewater ordinance.

The Board of Supervisors will meet Thursday at 9 a.m. to approve the September claims dockets. Their next regular meeting is Oct. 17 at 9 a.m.

Trooper Mitchell Chappell, of Brookhaven, an officer with the Mississippi Highway Patrol injured Sept. 11 on his way to a... read more