Week 7 a tough one for local teams 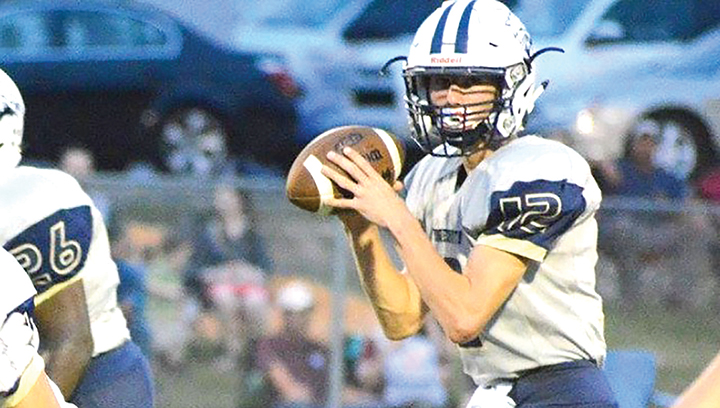 Photo submitted/Bogue Chitto quarterback Trey Nettles gets ready to deliver a pass during the Bobcats’ game against Mount Olive Friday.

Local teams headed into their contests last week with high hopes. Every team was facing vaunted competition, but a win would be sure to propel them into the conversation as one of the better teams in the state.

After the final buzzer sounded, fans emptied the stadiums and the lights dimmed, it ended up being a tough night of games for high school football teams. Area squads finished the seventh week of the season with an 0-7 record.

The going only gets tougher from here as district play continues. Here is what last week cost each team and what they will need to fix moving forward.

In the early portions of their game against Wayne County, the Panthers seemed to be well on their way to defeating the Eagles at home. Then, the turnover problems that doomed them against Northwest Rankin showed up. The Panthers ended the game with three interceptions and a fumble on the way to a 31-16 loss.

The Panthers had several solid drives stalled because of those turnovers and one of the interceptions was taken back for a touchdown. If Brookhaven hopes to rise to the top of their district, they have to take care of the football. Their offense is dynamic, but turnovers seem to not only kill their momentum, but demoralize them as well.

Wesson is not quite there yet

I have talked about how Wesson was my sleeper team. I have gone on and on about how they could surprise some people and make some noise in their district.

They faced their first true test of the season against district rival Hazlehurst and were blown off the field 51-28. The Indians have not been much of a passing team this year, but they managed 122 yards and two touchdowns on just nine pass attempts. Hazlehurst also doled out 549 yards rushing in a dominant performance.

The Cobras have a capable offense, but if they are to be the team I believe they have the chance to be they must improve on defense.

The West Lincoln Bears faced the toughest opponent last week as reigning 2A champion Bassfield came into town. The Jackets rolled to a 51-0 win in a contest that was over before the half. I did not have the opportunity to watch the game personally, but if the score is any indication then West Lincoln must improve on offense. It is highly likely that by the third quarter the Yellowjackets were playing second and third string players. In other words, the Bears could not even manage a score on the Jackets’ backup defense.

With players like Michael Brothern, Chase Owen and others there is definitely potential to put up a lot of points. The offensive line has struggled so far and if they are to avoid more games like this the improvement begins with the offensive line.

Enterprise has holes in secondary

The Prentiss Bulldogs have proven all season that their passing game is to be respected. So much so that during my weekly pre-game show I stated that Enterprise would lose if they could not stop the Bulldogs’ aerial attack. Well, Prentiss shredded the Yellow Jackets’ defensive backs en route to a 40-6 victory.

Prentiss was able to get some things done on the ground as well, but the theme was their ability to spread out the Enterprise defense.

The Jackets will face a few teams down the stretch with a proven ability to throw the ball, so they must improve their backfield.

Loyd Star has to finish games

The Hornets have had a hard time winning games because of turnovers. They had that problem in check for the most part against Amite County last week, but were still unable to pull out a win. Their two-point loss against the Trojans marks the fourth game of the season they have lost by less than a touchdown.

So, moving forward Loyd Star must finish games. The toughest part of their schedule awaits, so the Hornets must capitalize on every opportunity against much tougher competition.

Like Brookhaven, the Bobcats also struggled with turnovers. In a 40-6 loss to the Mount Olive Pirates, they had four interceptions and two fumbles. However, head coach Gareth Sartin said finishing drives was a bigger issue for Bogue Chitto.

Several long drives ended with turnovers, but even more ended with no points. Sartin said his team did some good things on offense and they did. The Bobcats are in the thick of district play and opponents like Sacred Heart and Lumberton have high-octane offenses. Sartin and his crew will have to put up points to stay in the games with these teams and to do that, they must finish drives.

Fielding only 14 players will put any team at a disadvantage, but don’t tell that to the Cougars. Each of these players realize they must give their all every night and Fisher Warren epitomized that in a homecoming loss to Parklane.

Warren had five tackles, an interception, 92 kick return yards, 61 rushing yards and a touchdown. If that isn’t a full-out effort, then I don’t know what is. He is sure to see plenty of touches moving forward as the Cougars continue to search for their first win.

Anthony McDougle is the sports editor for The Daily Leader. He can be contacted at Anthony.mcdougle@dailyleader.com

Photo by Anthony McDougle/ Brookhaven wide receiver John Hilbert is wrapped up by a Wayne County defensive back. Hilbert had... read more