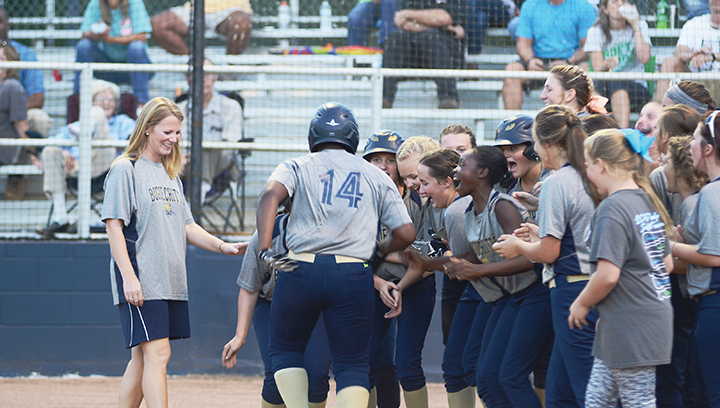 Photo by Anthony McDougle /Lineka Newson approaches home plate as her teammates await her after she hit a home run early in their win over the Bears Thursday.

Before the Bogue Chitto Bobcats squared off against the West Lincoln Bears on Tuesday night, Bobcats head coach Scott Leggett praised his team’s effort at the mound in the past few games.

His team continued their hot hitting against the Bears on their senior night, jumping on West Lincoln with five runs in the first inning on their way to a 10-4 win at home.

The victory moves the Bobcats to 14-6 on the season.

“We had a few innings where we cooled down a little bit, but I think we did a good job hitting the ball tonight,” Leggett said.

“I think we are 20 times better than we were two weeks ago. We just have to keep it up.”

Catcher Linkea Newson shined on the Bobcats’ senior night as well. The junior hit her first home run of the season to get the Bobcats on the board early in the contest and she also added a single to her stat line.

The Bobcats used a big first inning, highlighted by Newson’s homer and doubles from Leake and Jackson, to jump out to a 5-0 lead.

West Lincoln responded with a home run of its own off the bat of Kelsey Freeman to make the score 5-1 in the second inning. The Bears proceeded to load the bases and seemed poised to cut into their deficit more, but Anna Brooke Davis sent a ball high into the air with two outs to end the threat.

When their turn at the plate came, Bogue Chitto answered quickly. Savoie got things started with a triple with one out, then Terrah Nelson grounded out into a fielder’s choice to bring Savoie home to make the score 6-1.

The Bears continued to try and claw their way back, starting with a double by Sara Jane Doty in the top of the third. With runners on second and third, Freeman grounded out, but brought Doty in for a run.

Adi Paden added an RBI-single later in the frame to bring the score to 6-3.

Errors by West Lincoln allowed the Bobcats to get into scoring position in the bottom of the third and the home team capitalized. Newson brought a run in on a fielder’s choice and Frazier hit a two-out single into right field to extend Bogue Chitto’s lead to 8-3.

They added more runs in the next inning, as a bad hop to West Lincoln’s shortstop on a hit by Kirkland plated another run. The Bobcats tallied their 10th and final run in the fifth inning off a single by Wallace.

The Bears made one last-ditch effort at a comeback in the final frame.

Doty grounded into a fielder’s choice with the bases loaded, which brought in one run. However, West Lincoln was unable to add any more points to the scoreboard. They stranded runners on first and second base to end the game.

The Bears had four errors in the road loss.

“Miscues hurt us tonight. Bogue Chitto took a couple hits away from us with good defense, too. We’ll get where we need to be. We just have to keep working on it,” West Lincoln head coach Andrew Redd said.

Bogue Chitto will face Brookhaven on the road Friday at 5 p.m. The Bears return home to face a tough Wesson team at 5 p.m. Thursday.

Photo by Sherylyn Evans /Brookhaven Academy’s senior players were honored Monday during half time of their win over Copiah. Seniors... read more