Onlookers, Brookhaven fans included, may have thought the Panthers were in trouble when starting quarterback Sevante Quinn went down in the second quarter with a knee injury against Provine Thursday.

Anyone who thought so did not know about freshman quarterback Byrion Robinson. 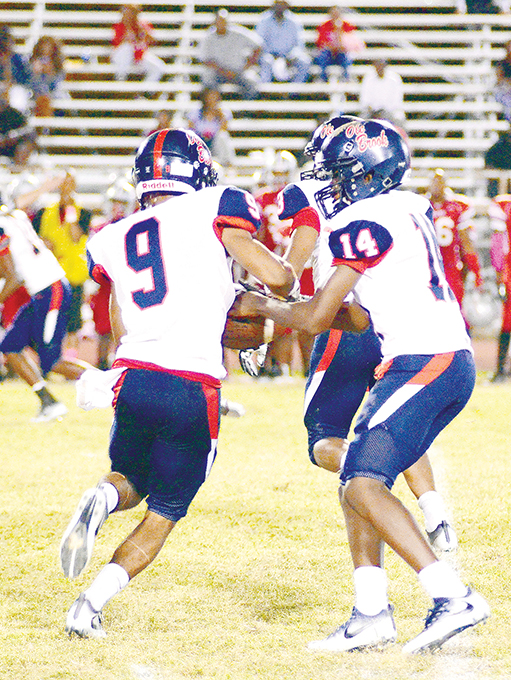 Photo by Anthony McDougle/Ole Brook’s freshman quarterback Byrion Robinson hands off to Don Blandon in the Panthers’ 13-0 district victory over the Provine Rams Thursday night at Hughes Field in Jackson.

The youngster stepped seamlessly into the role and, with the help of the Ole Brook defense, led the Panthers to a 13-0 win over the Rams in district play.

With the victory, the Panthers improved to 5-2 overall and 2-1 in the district.

“That’s a hard spot to put a ninth grader in, but he battled and threw some good throws in timely places and our team rallied around him,” head coach Tommy Clopton said.

The defensive effort was obviously a huge point of emphasis as well, as the unit led the Panthers to their first shutout win of the season.

“Hats off to our defense,” Clopton said. “When you put a goose egg on the board you are going to win every game you play. They played lights out all night.”

In a game where every point counted, the Panthers scored their first of the night by way of a 25-yard field goal by Tyler Mixon to take a 3-0 lead with 1:25 left in the first quarter.

The Rams got the ball and seemed poised to punch it in the endzone, but Kieran Willams was able to poke the ball loose. The Panthers recovered with great field position and Quinn raced to paydirt from about 20 yards out to give Ole Brook a 10-0 lead after the extra point was made by Mixon.

Provine was in search of some momentum in the contest and decided to go for it on fourth down, but was denied when Wesley Calcote came up with a clutch sack to return the ball to his squad.

Not long after, Quinn suffered the unfortunate knee injury that would sideline him for the rest of the contest.

Luckily, Robinson was able to step in and exhibit some great poise to lead his team the remainder of the contest. The freshman was able to take care of the ball while also taking as much as the defense would give him.

Both defenses stood tall in the third quarter to keep the score at 10-0 heading into the fourth quarter.

Robinson played his best in the final quarter, making some good throws and breaking off some key runs to lead his team downfield. The Panthers scored with 5:40 left in the game on a 24-yard field goal from Mixon to take a 13-0 lead.

On the ensuing kickoff, a Provine runner was able to find a seam and break for a big gain, but the Ole Brook special teams unit was able to force a fumble and put the game away.

Robinson finished the game with 37 passing yards and 50 rushing yards. Kenneth Dixon had 55 yards on 16 carries. John Hilbert led all receivers with three catches for 46 yards.

Jordan Blackwell paced the Ole Brook defense with 13 tackles. Calcote had a big night statistically with eight tackles, a forced fumble, a fumble recovery and a quarterback hurry.

Clopton said it may not have been a picture perfect game, but he was glad to take the district win.

“We weren’t our best, but we found a way to win a district game on the road,” the head coach said. “It was a very hard-fought game by both teams.”

Brookhaven will now turn its attention to district foe Laurel (5-1 overall, 2-0 district). They will face the Tornadoes in their homecoming game next week at 7 p.m. at King Field.

Every game means more for teams

Area high school teams are entering their third week of district play, which means each game will begin to hold... read more