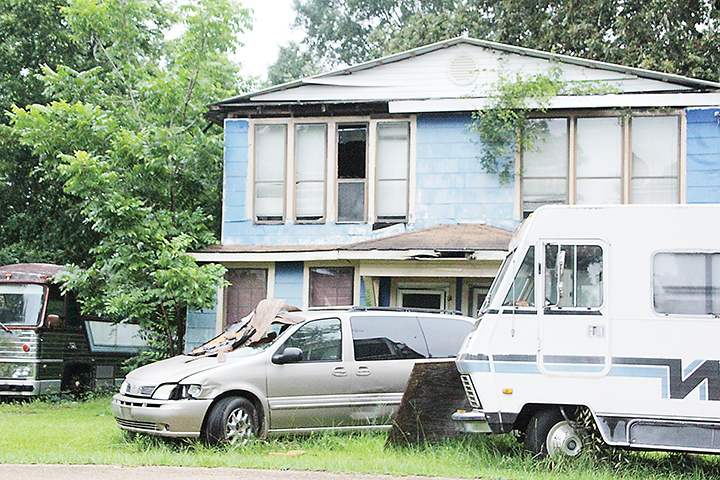 Photo by Alex Jacks/The new owners of 215 Railroad Street requested the Brookhaven Board of Aldermen give them time to clean up the property themselves, before moving forward with its decision to remove the structure.

Residents on Railroad Street may have to wait a little longer before a blight in the neighborhood is cleaned up or removed.

At a  Board of Aldermen meeting this week, Lawrence C. Smith Jr., one of the new owners of the property at 215 Railroad St., requested the board give him 90 days to clean up the property and structure before following through with the city’s 2016 fall clean-up list.

“Me and Roger Smith, my older brother, are the new owners of the property at 251 Railroad St.,” Smith said. “What we are asking is the board to allow us 90 days to clean up, secure the property, get that outward appearance in decent shape and up to city code.”

During a public hearing in July, the board voted to remove the vehicles, RV and structure at the address because it was deemed an eyesore and created dangers for neighboring residents.

City building inspector David Fern informed the board at the public hearing that the property had been on the clean-up list for several years, and that he could not get in touch with the owner at that time. He recommended the removal of the structure.

“I found out yesterday that the property had been sold,” Fearn said at Tuesday’s meeting. “After speaking with the city attorney, we need to have another public hearing with the new owners. We have to go through the same process with the two new owners.”

In the meantime, the city cannot do anything to the property, Fearn said.

Smith informed the board that he collected a list of signatures from several surrounding property owners, stating that they were in favor of giving him 90 days to clean up the property, per board approval.

After reviewing the list, Mayor Joe Cox asked, “What are the extent of the repairs?”

“Basically, what we need to do inside is a lot of painting and a little floor work to it,” Smith responded. “As far as that, the structure is really still basically there. We’ve got maybe a wall or two to frame up on the back end of the house, but other than that it’s still in good. Everything as far as roof wise is up to par. I just need to replace the windows, secure the doors, paint it and put some fascia boards back on it and get the fascia boards up to par.”

Fearn said Smith would need to remove the bus, camper, motorhome and cars from the property.

Several aldermen encouraged Smith to complete as much work as possible before the public hearing, explaining that it will help convince them that he will follow through on his promise to clean up the property.

“You know you’re behind the eight ball with this,” Ward 1 Aldermen Randy Belcher said. “We were looking at tearing it down. We’ll try to help you. We would love to see it looking good. The more you get done now, the more it’s going to prove to them that you are going to do something.”

“Mr. Smith, you said something about getting started,” he said. “A good faith effort on your part to get things rolling means a lot to this board, and whether you’re really going to follow through. Keep that in mind.”

Smith said he will continue working on the property until the public hearing.

It will be up to the board to determine then how much time, if any, Smith will be granted to clean up the property, Fearn said.