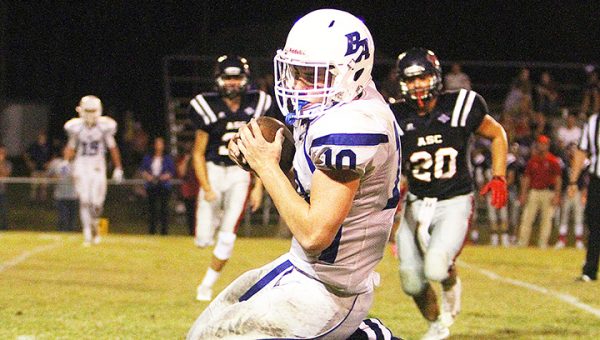 The Cougars cut the lead to 22 late in the third quarter when senior quarterback Madison Smith connected with sophomore wide receiver Cade Brown from 12 yards out.
Smith and sophomore Keegan Smith combined for 103 yards passing.

Senior Connor Griffin and his brother, sophomore Cole Griffin, each filled the stat sheet on defense.

Connor had nine tackles, a forced fumble and a fumble recovery. Cole had five tackles, two for loss and an interception. Senior lineman Kyle Cupit had seven total tackles.

The Cougars were only down 14-0 after two quarters, but the Amite managed to pull away in the third.

The Rebels’ Tyler Johnson broke for a 12-yard touchdown run to give his team a 22-0 lead.

With 5:45 left in the  quarter, the Cougars finally got on the board when Smith found Brown on a 12-yard touchdown pass.

It was less than three minutes after that score when Booty notched his third score of the night on a 12-yard run.  He took another run in from 26 yards out in the fourth quarter to seal the deal for the Rebels.

The loss moves the Cougars to 0-8 on the season and keeps them winless in district play as well.

For Amite School Center,  the win improves their record to 3-6.
BA will hit the road again Friday to face Simpson Academy (5-3 overall, 1-1 district play) in league play. Kickoff is set for 7 p.m.