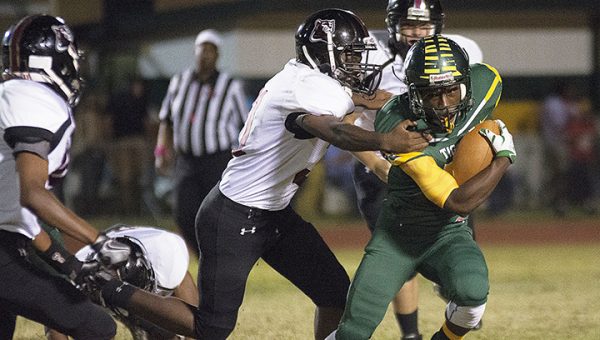 Photo courtesy of the Enterprise-Journal/
A Tiger running back tries to shake off a Cougar defender during Friday night’s game in McComb.

“The kids — I’m telling you — they’re coming together,” McComb head coach Jeffery Gibson said after his team’s third straight victory. “They’ve got one mindset and one common goal, and everybody’s working toward that. It isn’t about individuals.”

Tigers senior Venchenza McCray, who is also the starting quarterback, recovered a fumble at the Lawrence County (2-6, 1-1) 27 on the game’s first play from scrimmage after a bad exchange between the Cougars’ center and senior quarterback Charl’tez Nunnery.

A play after completing a 19-yard pass to Marcus Atterberry, Quitten Brown, in at quarterback, fumbled the snap.

McComb senior outside linebacker and defensive end Nick Harris recovered at the Tigers 38.

McCray capitalized after Harris’ fumble recovery with a 62-yard touchdown pass to Gerkithis McCray on the next play to extend McComb’s lead to 13-0. McCray had three receptions for 103 yards and three touchdowns on the night.

Aided by three McComb penalties and a 19-yard Brown run, Lawrence County advanced the ball to the Tigers’ 17 with less than seven minutes remaining in the first quarter.

After Nunnery recovered his own fumble on a snap, he threw an incompletion to give the Tigers the ball back on downs.

McCray then threw a short pass to wingback Ali Henson. The senior took the pass in for a 48-yard touchdown to extend McComb’s lead to 19-0.

McComb junior linebacker and strong safety Derius Anderson recovered a fumble at the Tigers 43 in the first quarter, and McCray capitalized with a 23-yard touchdown pass to Gerkithis McCray to give the Tigers a 25-0 lead with 10:27 remaining in the first half.

“They outplayed us,” Cougars head coach Jaymie Palmer said. “Our quarterback (Nunnery) is banged up. He had a quad injury coming in, so we didn’t run him, and we had a couple guys banged up at halftime, sowe got them out. McComb’s got a good team. They did a good job.”

Senior Kemarcus Brown and freshman Zavian Bridges both saw action at quarterback for Lawrence County during the second half.

With the Tigers already up 38-0 in the third quarter, the mercy rule went into effect, as there was a running clock for the remainder of the night.

McComb was unable to get off to quick starts in the non-district games, but things have changed the past two weeks.

The Tigers led 29-0 in the second quarter in a 45-20 win at South Pike on Sept. 30. The Tigers have also won the turnover battle the last two weeks.

“That’s one of the things we’re working on and we continue to work on,” Gibson said. “Expect to win and those guys are doing that.
“We’re focusing and not turning the ball over and making those mistakes.”

The Tigers’ only turnover came on a high snap in the fourth quarter and freshman Rodtravious Monley in at quarterback.

McCray was 8-of-12 passing for 250 yards and four touchdowns. Quitten Brown had 62 rushing yards for Lawrence County, while Nunnery was 5-of-9 for 43 yards.

The Tigers were penalized 10 times for 55 yards in the win.

Lawrence County hosts South Pike next week in a battle of two 1-1 teams in Region 6-4A.

McComb’s homecoming is next week against Florence, where the two 2-0 teams in Region 6 will meet. Kickoff is scheduled for 7 p.m. in both games.