Tillman, Indians too much for Franklin Co. 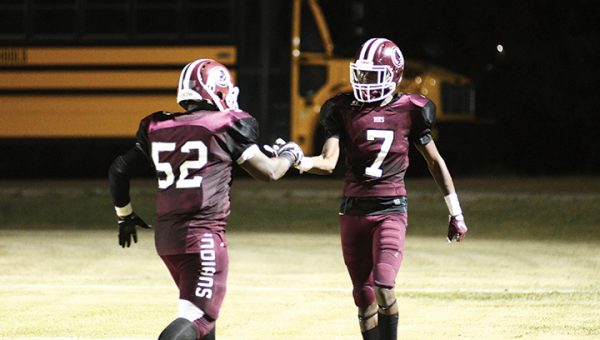 Photo by Anthony McDougle/
Hazlehurst’s Jaquaveon Tillman is congratulated by lineman Demetrius Swilley after reeling in a touchdown pass late in Friday’s home contest against the Franklin County Bulldogs.

The Hazlehurst Indians and the Franklin County Bulldogs have squared off in some epic battles over the years.

Friday night  in Indian Country, what fans saw was not one of those battles.

The Indians’ defense harassed Primetime 23 athlete De’Martre Collins and forced him to throw three interceptions as Hazlehurst coasted to a 44-7 win in district play.

The Hazlehurst offense put on a dazzling display, taking spectators by surprise with an effective aerial attack that complemented an already stout run game.

The Indians’ Primetime 23 wide receiver Jaquaveon Tillman was easily the game’s top performer, as he ended the night with a stat line for the ages.

The senior had 133 receiving yards and two touchdown catches, a 72-yard kick return for a score and an interception in the victory.

“All week I had been telling my teammates we need to go full speed tonight,” he said. “I knew I had to do that too, and tonight I came out and showed up.”

Hazlehurst head coach Todd McDaniel said he was impressed with Tillman’s effort across the board in the win.

“He’s a great athlete,” he said. “He  likes to say he’s always open and tonight he really played well for us.”

“I was glad to see us execute in the run game, but I’m also glad to see our passing game evolve into what we have been looking for,” McDaniel said.

The head coach said he hopes the emergence of a passing game will keep defenses honest moving forward.

“We want to force people to play the whole field, because we are willing to throw the football,” he said.
“If they give it to us, we are going to take it.”

Collins rushed for over 100 yards in the loss and was able to give the Indians’ defense trouble with his speed and shiftiness, but he was also forced into three costly interceptions to D’Arrius Rhymes, Jahem James and Tillman.  All told, the Bulldogs turned the ball over five times in the district loss.

“Collins is a phenomenal athlete and an extremely good football player,” he said. “You can only hope to contain him and that’s what we did tonight.  The win moves the

Franklin County will face Port Gibson on the road at 7 p.m. Friday, while Hazlehurst hosts a tough, athletic Wilkinson County team for homecoming at 7 p.m. on Friday.

Photo courtesy of the Enterprise-Journal/A Tiger running back tries to shake off a Cougar defender during Friday night’s game in... read more