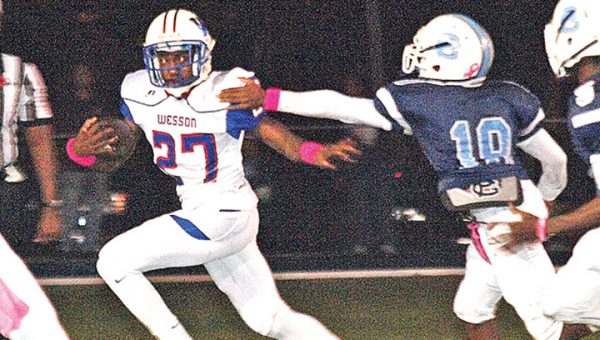 Port Gibson has made it a point to emphasize the running game so far this year.

They did not venture from that script at home Friday night, as the Blue Wave totaled 343 yards against Wesson to emerge victorious by a score of 34-13.

Peyton Burns went 17-of-22 passing for 169 yards and threw two interceptions with no touchdowns in the loss.

Dell Thigpen led all rushers with 61 yards and also added 54 yards on four catches. Ja’Quavion Harris was not far off with 52 yards on the ground. Will Hulon had 53 yards receiving, and Randy Hooker tallied 44.

“This was a disappointing loss for us, but give Port Gibson a lot of credit. They out-played us,” Wesson’s head coach Jeremy Loy said.

The Cobras started the game on offense but couldn’t gain any yardage and ended up punting on fourth down. The Blue Wave took over and was able to make some solid runs on their initial drive.

Then, Demarcus Johnson was able to break free and score the first touchdown of the game with 6:53 on the clock. The attempt at a two-point conversion was unsuccessful.

Down 6-0, the Cobras took control of the ball. Wesson’s Harris rushed the ball several plays and Burns connected with receivers Hulon and Hooker to begin the drive.

Unfortunately, the Cobras were unable to get anything out of their efforts and ended up punting the ball away.
The Blue Wave milked the clock the rest of the quarter with a stout run game and ended the first quarter with a 6-0 advantage.

The Blue Wave continued their drive in the second quarter but eventually turned the ball over on downs due to crucial tackles by Bobby Pritchard and Chamar Martin.

The Cobras came to life on the ensuing drive, moving the ball and earning seven first downs in the process with rushes by Thigpen, Jermaine James and Trey Glasper.

Burns snuck the ball into the end zone from the 2-yard line to put the first points on the board for Wesson. Matthew Craft made a successful extra point, and the Cobras took a 7-6 lead.

Port Gibson answered with another successful drive on the legs of quarterback D’Marious Hicks. Hicks out-maneuvered Wesson defenders throughout the drive and capped it off by racing into the endzone for a score.

Dequaveon Turner made the two-point conversion to give the Blue Wave a 14-7 lead. The Cobras didn’t have the ball long on their next drive when Port Gibson’s Jeremy Washington intercepted a pass by Burns.

Wesson struck back with an interception of their own by Brian Thomas, which put them in control on their own 32 yard line. They mounted a solid drive as the half came to a close but were unable to turn it into points, and the score remained 14-7 in the Blue Wave’s favor.

The Cobras started the third quarter kicking off and Port Gibson’s Jacory Rankin gained significant yardage before finally being brought down by Joseph Carraway at mid-field.

Dequaveon Turner capped off another drive laden with runs with a touchdown, and Hicks completed a pass for the two-point conversion.

Down 22-7, Wesson tried to get their offense going on the next possession, but Burns threw a costly interception to Patrick Minor to surrender possession.

The Blue Wave moved down the field but Chamar Martin, Kahlil Byther, Jeremiah Barlow and Jim Guess stopped them short on their drive.

In the fourth quarter, Hicks ran the ball into the end zone to widen the Blue Wave’s lead over the Cobras to 34-7.

On their last possession of the night, the Cobras were able to move the ball and earn four first downs. Harris ended the drive with points and ran 14 yards for a touchdown to end the contest with a final score of 34-13 in favor of Port Gibson.

Defensively, Craft led the way for the Cobras with eight tackles. Barlow had seven, while Pritchard and Damien Smith tallied six.

Loy said his team will have to improve moving forward in what is shaping up to be a competitive district.

“We have to execute better and make tackles on defense. We are going to get back to work on Monday and get ready for Jefferson,” he said.

The Cobras will play at home Friday against Jefferson County. Kickoff is at 7 p.m.