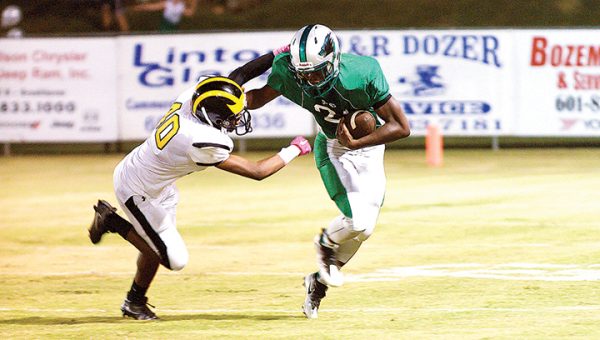 Amite County put up 20 points in the first quarter, and from there, they never looked back.

The Trojans (3-4 overall, 2-0 district) played the role of spoiler Friday night, as they steamrolled West Lincoln (1-6 overall, 0-2 district) 54-6 on the Bears’ homecoming night.

Despite getting off to a quick start on their opening drive, the visiting team soon found themselves facing fourth and five.

Trojans’ head coach Sedric Cain and his coaching staff took a chance and elected to go for the first down. The gamble paid dividends, as the Trojans converted and were able to maintain possession.

On the same drive, the Bears’ defense once again forced the Trojans into another fourth down.  They went for the sticks a second time, but West Lincoln came up with a stop.

The Bears seemed to be on the move after the defensive stop, but the Trojans’ Kendarian Bell managed to intercept a pass by quarterback Nathanael Addison.

He proceeded to return it 40 yards for the game’s first points. Amite County failed to convert the two-point attempt to put the score at 6-0.

Halfway through the first quarter, the Bears posted their only touchdown of the night when Addison connected with Austin Griffin for a five-yard score.

West Lincoln was unable to convert its two-point try as well, which tied the game at 6-6.

The Trojans closed out the first quarter with an offensive burst and were able to put up two more touchdowns. The first came by way of a seven-yard scramble by Amite County quarterback Trevarious Clack.

The second touchdown came as time was expiring. Javion Granger found a hole and reached paydirt on a 15-yard rush. The Trojans converted one of their two-point attempts and took a 20-6 lead into the second quarter.

After the strong showing by the offense to end the first quarter, the defense started the second with a big play of its own.

Bell picked up his second interception of the night and the Trojans managed to score quickly as Derrick Crosby connected with D’Kenyace Roberts for a 40-yard touchdown. Amite County once again failed to convert the two-point conversion, but still held a 26-6 lead.

After receiving the kickoff the Bears began to drive down the field, but penalties stalled their drive. The Trojans were in the endzone once again soon after, this time by way of a 30-yard pass.

Following the kick off the Bears found themselves on the Trojans’ 30 yard line.

Amite County’s defense managed to force and recover a fumble on the drive. They capitalized on the Bears’ miscue and scored one more time in the second quarter, as

Elijah Martin broke free for a 15-yard run to give his team a 42-6 lead at the half.

In the third quarter, the Bears were in a tough spot early as Amite County forced them into a fourth and eight.

Due to a roughing the passer penalty, West Lincoln was able to pick up the first down.  The penalty seemed to give coach Charlie Jackson’s offense life and they began to march down the field.

However, the drive stalled and the Bears found themselves in another fourth down situation.

They decided to go for it, but a sack by the Trojans’ Chance Harrell stopped the Bears in their tracks.

With a little over two minutes left in the third quarter, the Trojans got back into the endzone on a 50-yard pass. Starting their next drive on their own 38-yard line, the

Bears mishandled a snap which Amite County was able to pounce on to regain possession.

In the fourth quarter, Granger was able to once again break free of Bears’ defenders for a gain of 60 yards.

Martin capped of the drive with a 10-yard touchdown run, but the Trojans were unable to convert the two-point  conversion to put the game’s final score of 54-6 on the scoreboard.

The Trojans’ defense once again provided trouble for the Bears, as Marquise Roberts stepped in front of an Addison pass for insurance.

West Lincoln will be in district action again Friday, as they head to Prentiss (6-2, 2-0) to take on the Bulldogs. Kickoff is at 7 p.m.