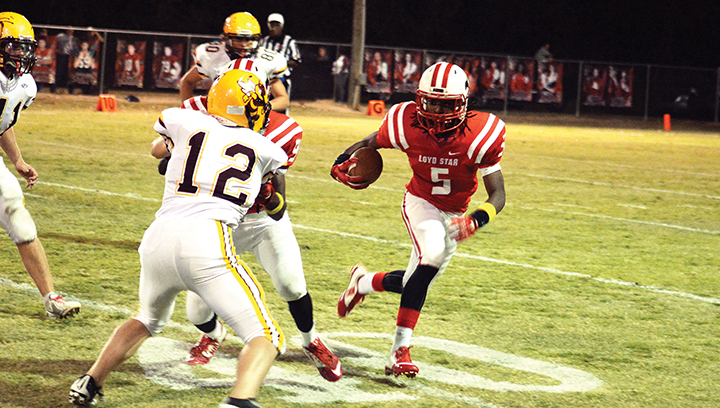 Once again it is time for an age old rivalry to be renewed as Enterprise and Loyd Star face off in the annual Sting Bowl tonight. Just as was the case last year, the stakes are pretty high for both teams.

Loyd Star was able to emerge victorious in the rivalry last season. That win, coupled with a win against West Lincoln, was just enough to get the Hornets into the playoffs.

As the end of the season approaches,  the Hornets and Yellow Jackets are still in search of their first district win, so the situation is similar to that of the 2015 season. A win in this game is crucial and to attain it each team will need their players at their best.

With that being said, here are my X-factor picks for each team in the Sting Bowl and the other squads in the area.

The Hornets have lost a lot of games they should have won this season. Their 2-6 record is not indicative of the team they are, but it is where they stand due to an inability to take care of the ball and finish close games.

Since Enterprise has been proven to be vulnerable to the pass game, the difference for Loyd Star in this game will be their passing game, and more specifically, James Beard.

The sophomore Primetime 23 selection has 556 yards receiving on the year and is a threat to score every time he touches the ball. He will pose a lot of problems for the Jackets’ defense.

I realize that X-factors are usually one player, but this is a special situation. The Hornets are sure to spread the Jackets out after seeing how Prentiss exposed them, which is why it will take a concerted effort from the whole unit.

James Beard should be Enterprise’s top priority, but Michael Harvey and Ray Richardson are threats at the receiver position as well. If they want to get their first win in league play, the Jackets must account for all of these players and PT 23 selection Parker Flowers.

My sleeper team is in a precarious situation. After being blown out by Hazlehurst and losing to a Port Gibson team I felt they were capable of beating, the Cobras are in desperate need of a league win to keep their playoff hopes alive.

In those losses, their offense has struggled to put points on the board. Wesson must find their offensive identity again tonight against Jefferson County (2-5 overall, 1-1 district) and that begins with wide receiver Will Hulon.

The senior leads the team in catches (33), receiving yards (524) and touchdowns (8) and is a pivotal part of the offensive gameplan for the Cobras.

Hulon and running back Dell Thigpen must reestablish themselves and take the helm of the offense to keep the Cobras in the playoff hunt.

The Panthers are facing what could be their most talented opponent of the year tonight when Laurel comes into town for homecoming. The Tornadoes are loaded across the board, but their ability to pass the ball and find success after plays break down is what makes them special.

Quarterback Tyquan Ulmer and receiver Dontario Drummond are a deadly tandem that must be accounted for and the brunt of that responsibility will fall on standout defensive back J.J. Jones. He will likely be tasked with guarding Drummond most of the night. Jones, along with the rest of the Ole Brook secondary, will also have to corral Ulmer once he goes on the run.

Jones is the leader of the secondary, though. As he goes, so will the others.

The Bears will be the third area team to face the offensive juggernaut that is the Prentiss Bulldogs football team. All of the other three failed to beat the Bulldogs and West Lincoln will do the same if they are not able to match Prentiss’ scoring output.

In my opinion, that effort should start and end with PT 23 wide receiver Chase Owen. The junior is easily the Bears’ best offensive weapon, but he has not performed to  his sterling standard so far this year. A standout night from Owen, in addition to a stellar effort on the part of the defense, is essential to the Bears’ chances.

The odds will be stacked heavily against the Bobcats tonight. They face one of the best teams in all of 1A on the road in Lumberton. The Panthers have averaged close to 40 points a game this year and a lot of their success centers on the run game. Of course it will take athletes to stop them, but sound leadership is important as well. Linebacker Sherman Jackson brings that leadership. He may not lead the team in tackles, but he is surely one of its leaders and the defense will look to him for big plays and composure as they try to stop Lumberton’s running back Dre Coleman, who has averaged 142 yards a game.