Bulldogs dominate in 56-14 win over Bears 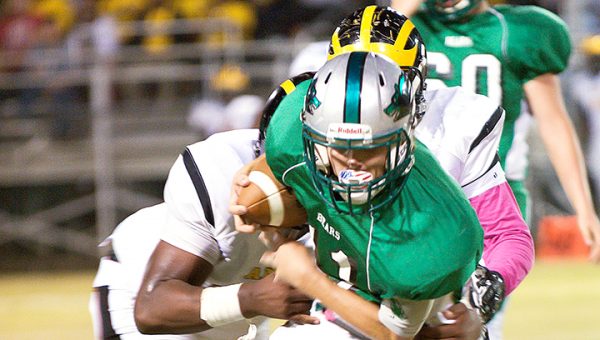 Prentiss’ defense wasted little time establishing their dominance at A.E. Field Friday night.  The Bulldogs (6-2, 3-0 district) ran away with the game early and crushed the Bears (1-7, 0-3 District) 56-14 on senior night.

On the Bears’ opening drive of the night, Prentiss’ defense proved they were going to be a force to be reckoned with throughout the game. Quentin Herring set the tone by bursting through West Lincoln’s offensive line and sacking Nathanael Addison.

The Bears’ offense continued to stall on their opening drive as a penalty backed them up to their own goal line. Herring once again was able to get into the backfield, sacking Addison inside the endzone and tallying a safety for Prentiss.

Following the free kick, Prentiss’ offense wasted no time moving downfield. Prentiss’ Jalen Madison capped off the drive with a one-yard quarterback sneak, but the Bulldogs missed the two-point conversion.

The Bears’ struggles continued, as Prentiss was once again able to sack Addison inside the end zone for another safety.

West Lincoln’s defense did show a spark, as Addison was able to intercept a pass by Madison, to set the Bears up for their third possession of the night on the four-yard line.

Prentiss seemed to have scored their third safety of the night, however a penalty negated the safety and gave the Bears a much-needed first down.

With less than six minutes left in the second quarter, Baker crossed the goal line again on a one-yard rush. The Bears finally were able to get on the board in the second quarter by way of a 55-yard touchdown pass from Addison to Ledarrious Jones to make the score 32-6 in favor of the Bulldogs.

Prentiss got the score back, though; with a 59-yard pass, they took a commanding 42-6 lead into halftime.

Prentiss picked up where they left off in the third quarter and scored quickly on a 44-yard touchdown pass. They elected to go for the extra-point attempt, but missed wide right.

With just over a minute left in the third, Jeremiah Stewart broke free for a 25-yard touchdown to tally the Bulldogs’ final score of the night. Halfway through the final quarter, West Lincoln scored the final points of the night on a 60-yard pass by Addison to Jones.

“We were outmatched athletically,” West Lincoln head coach Charlie Jackson said.  “There is still a level of mental grit that we don’t have. I take some of that responsibility on myself. When our kids learn to hate losing and it becomes painful, then you will start seeing a different level of focus and grit.”

The Bears resume district play this week with a home game against county rival Enterprise. Kickoff for the contest is scheduled for 7 p.m.