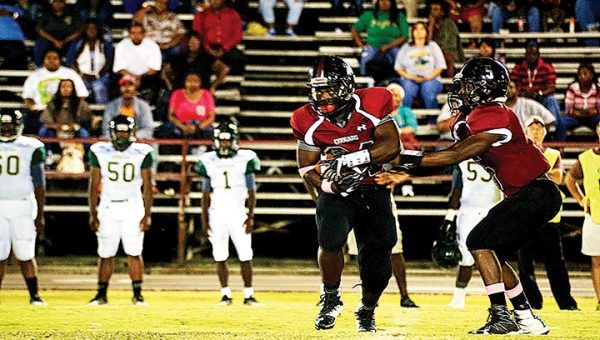 The Lawrence County Cougars dominated the South Pike Eagles in Region 6-4A high school football action Friday night as they roared to a 35-0 halftime lead, then cruised to a 42-18 victory.

With the win, Jaymie Palmer’s Cougars improved to 3-6 overall and 2-1 in Region 6-4A play.  South Pike, coached by Brinson Wall, fell to 4-4 overall and 1-2 in the region. Both teams have losses to region rival McComb.

Lawrence County got a big night out of its two senior playmakers. Quitten Brown rushed for 109 yards and a touchdown, caught a touchdown pass, and returned a pass interception 85 yards for a touchdown.

Quarterback Charl’Tez Nunnery completed 10-of-11 passes for 200 yards and four touchdowns.  He completed his first 10 passes of the night.

“We had a good night,” Palmer said.  “We got beat up at McComb last week, so I’m very proud of the way our team bounced back from that. We’ve still got hopes of a high division finish and a home playoff game.  That’s what we’re working for.”

The Cougars dominated from the outset on Friday.  Lawrence County drove for 84 yards and a touchdown on its first possession of the night.  The key play was a 43-yard pass from Nunnery to Kendarius Feazell.  That play set up Brown’s nine-yard scoring run.

Adam Hux kicked the first of five straight extra point attempts through the uprights to give the Cougars a 7-0 lead.

Moments later, after Brown blocked a South Pike punt, Nunnery hit Feazell for 37 yards and a touchdown to make it a 14-0 game.

Just three plays after that, Cougar linebacker Kemarcus Brown recovered a South Pike fumble. Then, Nunnery threw a six-yard touchdown pass to Marcus Atterberry to give the Cougars a 21-0 lead at the end of the first quarter.

South Pike put together a nice drive after that, largely powered by the passing of senior quarterback William Carter Jr.  The drive stalled at the LCHS 11-yard line, however, when Carter was stuffed on a fourth-down run.

Lawrence County then responded with a quality drive of its own as the offense went 89 yards in just five plays.  A Nunnery 27-yard run set up a 26-yard touchdown pass to Atterberry that made it 28-0.

After the Cougar defense quickly forced a three-and-out from South Pike to set up the final score of the half.  Brown ran for 16 yards to set up his own 27-yard touchdown reception to extend the Cougars’ lead to 35-0 in the first half.

South Pike competed well in the second half.  The Eagles drove the length of the field to start the third quarter, but Brown intercepted a Carter pass and returned it 85 yards for Lawrence County’s final tally of the night.

South Pike scored three touchdowns in the final 13 minutes of the game.  The first came on a Deldrionn Amos two-yard run.  Midway through the fourth quarter, Carter threw a 13-yard touchdown pass to Keshun Nimox.

Finally, with just over a minute left in the game, Eagle linebacker Angus Armstrong stripped a Lawrence County runner of the football, and returned it 57 yards for a touchdown.

Amos rushed for 134 yards and a touchdown for South Pike. Carter completed seven- of-18 passes for 87 yards.

The Lawrence County defense was led by its linebacker corps. Brandon Bullock (six solo, six assists) and Kemarcus Brown (six solo, four assists) were in on 12 tackles each.

Bulldogs dominate in 56-14 win over Bears