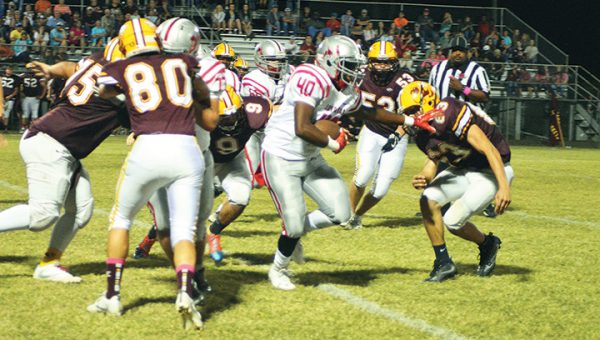 Tensions were high on Harry Cole Field Friday night, as a lot was at stake in the annual Sting Bowl between Loyd Star and Enterprise.
In the end, it was the Hornets that got the better of the Yellow Jackets as they cruised to a 50-8 victory.

“I was proud of our physicality, but there was some mistakes that led to us losing the ball,” Enterprise head coach Brooks Burns said. “You have to give credit to Loyd Star, though, they are a good team.”

It wasn’t long into the game before Loyd Star’s Parker Flowers and James Beard made their intentions known. Flowers completed a pass to Beard, and the sophomore speedster charged downfield and into the endzone to put the Hornets on the board first with 9:25 left in the first quarter.

Michael Harvey then punched in the two-point conversion to give Loyd Star an 8-0 lead.

The Jackets’ defense fought hard to keep the Hornets out of the endzone the remainder of the half, but the Hornets offense was too strong. Loyd Star scored two more touchdowns before the end of the half to give them a comfortable 22-0 advantage.

Enterprise returned after halftime determined, making short yardage gains and trudging their way downfield. Just as things were looking up for the Jackets, the ball was turned over to the Hornets on a fumble.

Flowers capitalized on the miscue and reached the endzone twice before the end of the third quarter, leaving Enterprise trailing 36-0.
Loyd Star continued to dominate in the fourth quarter, beginning with Flowers passing to Beard for a touchdown early on.

Patrick Price scored on a touchdown run before the end of the fourth to give the Hornets a 50-0 lead.

Intent on not allowing a shutout, Darren Richardson broke loose on a 22-yard run to bring Enterprise closer to the end zone. After a couple of short yardage plays,

Richardson broke loose again for 28-yard touchdown run to finally put Enterprise on the board with only two minutes left in the game to make the score 50-8.

Richardson dominated on both sides of the ball for Enterprise. For the second week in a row, he led the Jackets in rushing with 50 yards. Marvin Butler was not far behind, carrying the ball for 49 yards. Richardson also led the defense with nine tackles. Tailor Young followed with eight tackles on the night.

“I thought we played well in all phases of the game,” Loyd Star head coach Adam Cook said. “We finally played to our potential tonight and I was proud of our effort.”

Both teams will continue district play this week. Enterprise will travel to West Lincoln to take on the Bears, while Loyd Star will be making a road trip to Bassfield. Both games are scheduled to kickoff at 7 p.m.