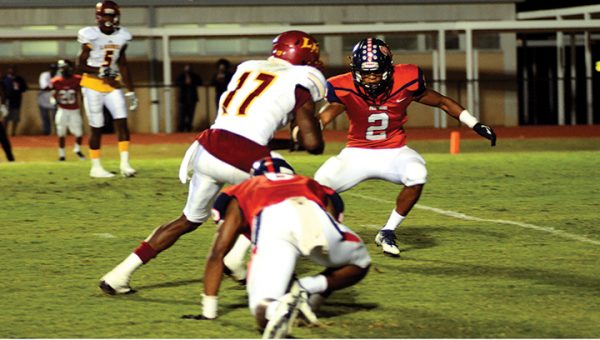 The beginning of Ole Brook’s district game against the Laurel Golden Tornadoes Friday was eerily similar to their loss against Wayne County.

The Panthers got off to a great start on both sides of the ball, but Laurel was able to run away with the game in the second half and defeat Brookhaven 41-17 in a crucial district contest.

With the loss, the Panthers fall to 5-3 overall and 2-2 in district play. Laurel improves to 7-1 on the season and remains unbeaten in the district.

“Our guys played hard but getting better and close is not enough,” Ole Brook head coach Tommy Clopton said after the loss.
“We got back in it, but we couldn’t close it out in the end. We have to learn to finish and close out ball games.”

The Panthers started the game with all the momenutm and seemed completely zoned in. It was clear they wanted to establish their run game and they found success on the ground in the early portion of the contest.

Kenneth Dixon’s first two carries went for more than ten yards, and freshman quarterback, Byrion Robinson, exhibited some toughness on fourth down by stretching out for a first down after contact to keep a drive alive.

After the long drive, the Panthers were forced to settle for a 36-yard field goal by Tyler Mixon that gave them a 3-0 advantage.

Ole Brook was able to force a fumble on the Tornadoes’ next drive, and Demarrell Leggett capitalized on it by rumbling 89-yards downfield for a touchdown.

Laurel’s offense seemed to rise from the dead after that score as they put 19 points on the board. The run was highlighted by a dazzling 26-yard pass-and-catch between the tandem of quarterback Tyquan Ulmer and Dontario Drummond for a score.

In the second half, the Golden Tornadoes began to slowly pull away in the game.

Ulmer diced the Ole Brook secondary and completed a long touchdown pass to Je’Vah Jones to put Laurel up 27-10.
Leggett responded once again, but this time he reached paydirt on a 28-yard touchown pass from Robinson.

Ole Brook was held scoreless for the rest of the contest and the Golden Tornadoes tacked on two more scores to put the game out of reach.

The Panthers forced the Tornadoes into third and long situtiaons thorughout, but pass interfernce penalites and the legs of Ulmer bailed them out each time.

Before the contest, Clopton said his secondary would have to set the tone for them to win.

The Laurel receiving corps scored four touchdowns through the air and sustained drives with its passing game, giving the defensive backs of Ole Brook trouble throughout the game with their size and athleticism.

“I thought our secondary played really well for three quarters. We’ve got to play all four to win big games,” Clopton said. “We can’t blow assignments and leave guys wide open when we know what’s coming.”

Leggett led all rusher with 106 yards and a score on 14 touches, while Dixon racked up 71 yards on nine carries. Robinson finished the game with four completions for 87 yards and one score.

The Panthers will hit the road to face the West Jones Mustangs in yet another crucial district contest Friday. The game is set to kickoff at 7 p.m.