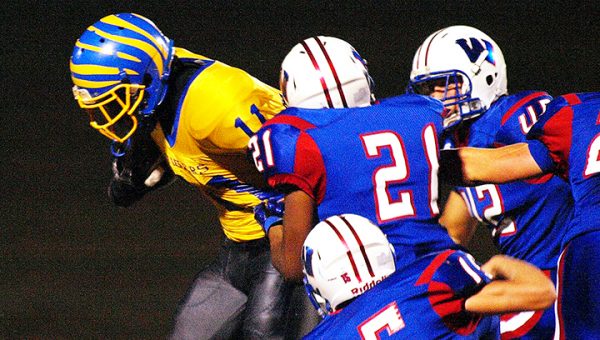 Photo by Tracy Fischer/
A host of Wesson defenders attempt to bring down a Jefferson County ball carrier in a district tilt between the squads Friday.

The Wesson Cobras hosted the Jefferson County Tigers for division play Friday night and put up a good fight, but the Tigers jumped ahead in the fourth quarter to take a 48-34 victory over the Cobras.

“I am proud of the way my guys fought,” head coach Jeremy Loy said. “We had a chance to win and just came up a little short. I can’t complain about their effort though. Good things will happen if we continue to play with that kind of effort.”

The Tigers started the game with possession and Jalen Herrington moved the ball down the field for four first downs despite stops by Cobra defensive players. Tiger quarterback Rah’Kendrick Reynolds ended up sneaking into the end zone from the 2-yard line for a touchdown. The two-point conversion was unsuccessful, but the Tigers still held a 6-0 lead.

The Cobras struck back on offense as quarterback Peyton Burns connected with wide receiver Will Hulon for a 48-yard gain to get things started for Wesson. Jeremiah Barlow then rushed into the end zone for a touchdown, and Matthew Craft made the extra point to put the Cobras in the lead going into the second quarter with a score of 7-6.

After controlling the ball to end the first quarter, the Tigers capped a long drive when Herrington ran the ball in from the 11 yard line and made a two-point conversion to add eight points to Jefferson County’s score.

The Cobra offense tried to move the ball on the next drive, but an interception by Kevon Williams put the Tigers back in possession.
On the next play, Reynolds completed a touchdown pass to Jaquarious Blake.

Dell Thigpen answered the score with an 85-yard kickoff return for a touchdown.  Craft’s extra point was good and the Cobras added seven points to trim their deficit.

After a defensive stand, the Cobras took over and capped a drive highlighted by seven first downs, with Barlow rushing in his second touchdown of the night to tie the game at 20 going into the half.

Wesson started the third quarter with the ball and Thigpen rushed from the 27-yard line, dragging the Tiger defense on his shirttails for a touchdown.  Craft’s extra point was successful and the Cobras took the lead.

Jefferson County responded with a long drive capped by Herrington punching in a score from the one-yard line and a successful two-point conversion put the Tigers in the lead with a score of 28-27 at the end of the third quarter.

In the fourth quarter, a drive by Jefferson moved them to the Cobra 34-yard line and quarterback Reynolds ran the ball for a touchdown to extend their lead to 34-27 after their two-point attempt was unsuccessful. Wesson had the ball for a short time on the ensuing possession before the Tigers recovered a fumble and took control again.

After forcing a turnover on downs, the Cobras reached the endzone when Thigpen scored from 15 yards out to tie the game at 34.
Jefferson County moved the ball down the field on the following drive, and Reynolds ran 43 yards for a score. After a successful two-point conversion, the Tigers regained the lead at 42-34.

The Cobras offense took over on their own 39 yard line with hopes of tying the contest, but Jaquarious Blake returned an interception for a score to give the Tigers a two-touchdown advantage.

Wesson was unable to reach the endzone on their final drive and the game ended with a final score of 48-34 in favor of Jefferson.

Wesson will travel to Franklin County Friday night to face the Bulldogs.  Game time is 7 p.m.