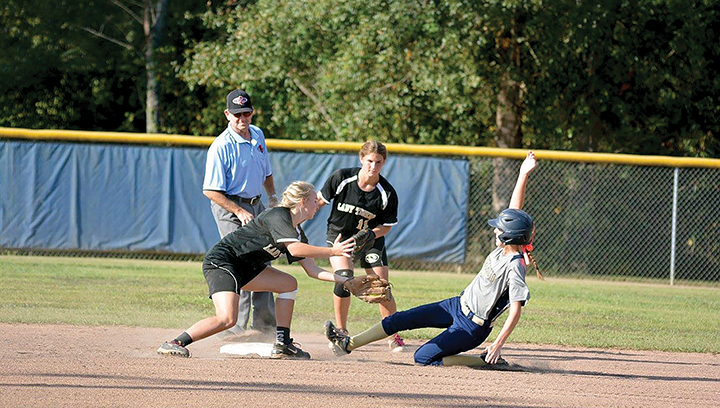 Photo submitted/Bogue Chitto senior Terrah Nelson slides safely into second base during the Bobcats’ second round series against Ethel over the weekend.

BC ONE STEP CLOSER TO STATE TITLE

Bogue Chitto head coach Scott Leggett and his team are not anywhere they did not expect to be.

As a constant in the state playoffs in both slow-pitch and fast-pitch softball, they expect nothing less. Their sweep of Ethel in the second round of the slow-pitch softball playoffs gets them one step closer to their goal of a state title.

They will have a chance to advance to the title game when the South State playoffs begin against Sebastopol today in Bogue Chitto.

Game Two may have been the decisive contest in the series, but the Bobcats’ play in Game One made the difference. From a diving catch by Cherie Savoie in the bottom of the first to prevent Ethel from tying the game down to the timely hitting by the entire lineup, Bogue Chitto kept making plays.

“We had to play from behind the entire game, but our defense made some big plays to keep us in it,” Leggett said. “Game One really gave us some momentum.”

The Bobcats have found much success at the plate as of late and Leggett said his team could not have chosen a better time to reach their peak.

“Now is the time to do that and it is something we have stressed over the years,” Leggett said. “These are the games that matter, so we have to be at our best at this point.”

Sebastopol, the team Bogue Chitto will be facing in the South State playoff series, is a familiar foe. Leggett said he has faced Sebastopol over 15 times in his career as the Bobcats’ head coach.

Sebastopol eliminated the Bobcats from the playoffs two years ago.

“They hit the ball really well so we have to keep doing what we have been doing. It’s going to come down to who hits the ball better. We can’t afford to make mistakes on defense,” Leggett said.

Against a team of this caliber, Legget said it is important to minimize errors and keep the game simple.

After the triumph in the second round over Ethel, a team that beat them in the playoffs last season, the Bobcats are feeling confident heading into today’s series.

“They’re feeling good right now,” Leggett said. “A lot of our younger girls are growing up. The big thing is that when it’s not happening for some, others are able to pick up the slack.”

Unfortunately, the Bobcats will be without their starting catcher, Linkea Newson. Newson suffered a torn ACL during practice and will be out the remainder of the playoffs.

Game One of the South State playoffs will begin at 5 p.m. with Games 2 and 3 (if necessary) immediately following.

Playoff picture getting clearer for teams