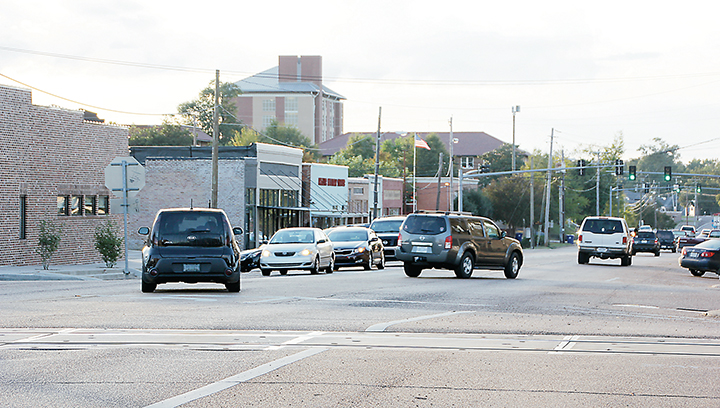 Photo by Alex Jacks/The Brookhaven Board of Aldermen have plans to reroute the city’s downtown streets in order to cut down on traffic and create more parking for residents and shop owners.

The Brookhaven Board of Aldermen’s plans to give downtown streets and parking a makeover are right on track.

Ryan Holmes, an engineer with Dungan Engineering, told the board Tuesday that his firm was completing the plans and paperwork for the project.

“We should be finished with all of the documents pretty soon,” Holmes said.

Despite the progress on the project, Holmes advised the board to wait until January to advertise and bid out the renovations.

He had previously advised the board in August that they should delay advertising for bids.

“With the holidays, activities and parades occurring from now to the end of the year, I don’t think it would be a good idea. I think we should work as hard as we can to get everything ready and shoot to start in January, weather pending,” he said at the earlier meeting.

The project will turn Whitworth and Railroad avenues into one-way streets, Holmes said.

“Whitworth Avenue would run south and Railroad Avenue would run north,” he said. “We would also change the two intersections on Cherokee Street to four-way stops instead of signals to address the traffic flow there.”

Holmes said the project would include repaving all of the downtown streets, restriping all of the streets and parking spaces to match the new pattern. The project also includes paving Cherokee Street from downtown to Brookway Boulevard, he said.

In addition, the project will now include restriping Sawmill, Williams and Martin Luther King streets.

Ward 1 Aldermen Randy Belcher made the motion at Tuesday’s meeting to include the restriping of those three streets, per Holmes’ recommendation.

“Ryan is in agreement that it would probably be a good idea to go ahead and stripe those streets also,” Belcher said.

“I rode those with Randy and they have a lot of traffic on them,” Holmes said.

The board, excluding Ward 6 Aldermen David Phillips, approved the restriping of the three streets. Phillips sustained from voting for lack of information since he walked into the meeting late.

Holmes reported to the board that the Old Train Depot roof project is well on its way to being complete.

“I am well pleased with the progress they’ve had,” he said. “You may have noticed the last couple of days there hasn’t been a whole lot of activity, however.”

The activity on roof will be tminimal for the next four to six weeks, Holmes said.

“The reason for that is we let them reuse as many of the old tiles that were in good condition and weren’t cracked,” he said. “What are on the roof now are all the old tiles that we can reuse. Now we’re just waiting on the new tiles. Those new tiles have been ordered, but we’ve been told is will be about four to six weeks before they get here.”

The roof structure is protected, as the contractor, E Cornell Malone Corp., has sealed it, Holmes said.

“It’s water tight, so it’s protected from rain,” he continued. “Meanwhile, they’re working underneath, continuing with the boards, electrical, and we’ll start doing some painting soon. You will not see a lot of activity as far as the roofing goes for at least the next month.”

Holmes expects the contractors to be completed with the project about a week after the new tiles are delivered.

Belcher requested the contractor move the scaffolds from the parking lot next to the depot to allow for more parking over the next four weeks.

“I can definitely inquire about that,” Holmes said. “That’s definitely possible. They were using the scaffolds to stack tiles, but they’re not on there now.”

Holmes predicts the crews will complete the crack seal — the act of filling in pavement cracks to extend the runway’s longevity — portion of the project by next Thursday.

“After that another crew will come in and restripe the entire runway, and then the project will be done,” he said. “The full project will be completed in a month’s time.”

Holmes said the airport is officially shut down, but the construction company is trying its best to accommodate local companies.

“We’re doing our best to get those companies that are local in and out early in the morning and back late in the evening, if need be,” he said.