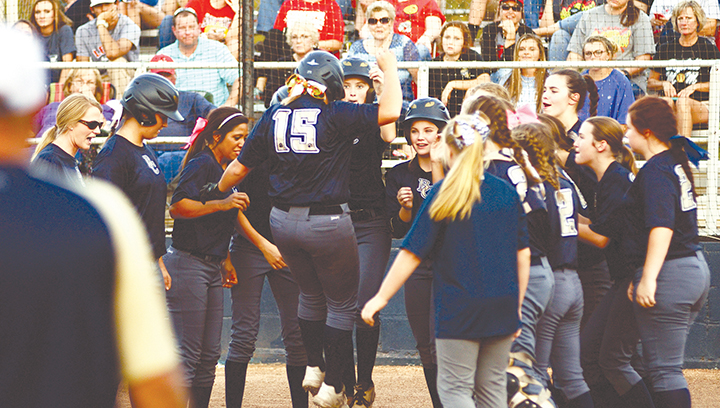 Photo by Anthony McDougle /Bogue Chitto first baseman Reagan Kirkland jumps onto home plate in celabratory fashion after hitting a home run in the South State championship series against Sebastopol earlier this week. Kirkland and the Bobcats face Hamilton in the 1A State Championship Saturday.

At this point, saying that there is not much Bogue Chitto softball head coach Scott Leggett has not seen may seem a bit worn out.

But for a coach that has six South State titles and six state championship appearances, the statement is all but too true.

Saturday, Leggett and his Bobcats will have a chance to add to an already loaded trophy case and storied tradition when they face the Hamilton Lions in the 1A slow-pitch softball title game at Freedom Ridge.

Bogue Chitto has seen Hamilton at this stage before, so they are all to familiar with the Lions.

The Bobcats captured their 2014 fast-pitch title in a thrilling three-game series against Hamilton. In doing so, they thwarted the Lions’ chance at capturing titles in slow-pitch and fast-pitch softball in the same calendar year. Because of that, the Lions will likely be looking for revenge against Leggett’s squad.

As far as he is concerned, it is just another day and another game.

“We have been here before,” he said. “With the exception of our catcher (Kylie Chapman), all of our girls have championship experience so it’s nothing new for us.”

After doing some homework on the Lions, the Bobcats’ head coach said he is expecting to face a team with power similar to Sebastopol. The Sebastopol Bobcats were able to hit seven home runs in the South State championship against Bogue Chitto, so Leggett’s outfield may be in for a workout against Hamilton.

“Hamilton has always had a pretty powerful team. The first three in their lineup can hit it pretty well, and there are some other good hitters in their lineup as well,” Leggett said.

He added that his team will have to play solid defense because the championship will likely come down to who hits the ball better.

Bogue Chitto is not lacking in the power-hitting department, either.

In fact, it could be argued that they have peaked at the perfect time.

In their series win over Sebastopol, the Bobcats hit six home runs.

First, baseman Reagan Kirkland was responsible for three of those, including a walk-off grand slam in Game 1.

Shortstop Codi Leggett only hit one homer in the series, but her head coach said he feels she may be in for a big game.

“Codi had a really good day of batting practice today (Thursday),” Leggett said. “I think she hit about seven home runs out of the park.”

Big hits could be at a minimum for both teams Saturday, as the field at Freedom Ridge is a bit deeper than the typical softball field.

Leggett said his scouting report revealed that Hamilton sometimes shows a reliance on the long ball, so the bigger field could work to his team’s advantage.

“We have to control what we can and stay routine on defense,” he said. “I told my girls it is just like a normal day. We need to go up there and just play.”

The 2016 high school football season has dwindled down to two or three remaining weeks.  Ever since the first game... read more