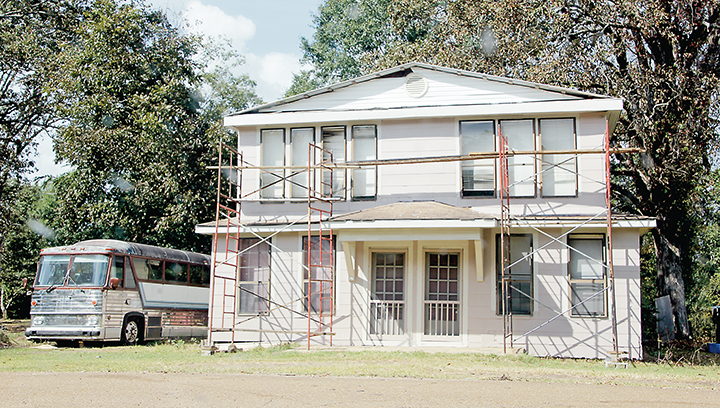 Photo by Alex Jacks/The new owners of 215 Railroad St. have made progress cleaning up the property and structure since requesting that the Brookhaven Board of Aldermen give them time to make improvements.

Railroad Street residents will have to wait even longer before the fate of a hazardous property that needs to be cleaned up or removed is known.

At a Board of Aldermen meeting earlier this month, city building inspector David Fearn notified the board that 215 Railroad St. — a property that had been on the city’s building clean-up list for several years — had been transferred to two new owners.

Fearn had learned of the transfer the day before the meeting. “After speaking with the city attorney, we need to have another public hearing with the new owners. We have to go through the same process with the two new owners,” he said

Lawrence C. Smith Jr., one of the new owners of the property, requested the board give him time to clean up the property and structure before following through with its removal, as recommended at a July public hearing.

“Me and Roger Smith, my older brother, are the new owners of the property at 251 Railroad St.,” Smith told board members at the Oct. 4 meeting. “What we are asking is the board to allow us 90 days to clean up, secure the property, get that outward appearance in decent shape and up to city code,” he said.

Despite the board’s best efforts to follow the proper procedure in this instance, at Tuesday’s meeting city attorney Joe Fernald, who was absent at the Oct. 4 meeting, said the proposed date was too soon and did not allow enough time to contact one of the owners. He recommended the public hearing be pushed back to Nov. 17 at 6 p.m.

“There was subsequent transfer of ownership of the property after the meeting had been set and when notice was given, but prior to the hearing,” Fernald said.

The property was transferred from Lawrence C. Smith Sr. and his wife to his sons, Lawrence C. Smith Jr. and Roger Smith. At the time of the meeting announcement in July, the sons were not notified of the public hearing

When it was decided earlier this month to hold another public hearing for the Railroad Street property, the sons were notified, but Lawrence C. Smith Sr. and his wife were not, Fernald said.

“The recommendation I have is this — there are basically four parties (Lawrence C. Smith Sr., his wife and two sons) involved — the best I can tell — in this property,” he said. “This meeting needs to be reset for Nov. 17 to allow enough time to notify each party.”

Fernald continued, “This is probably one of the most dangerous and complicated situations for a city to be in. I’ve been doing this job for 20 years and this is the first time I’ve seen anybody do this kind of transaction like this.”

The board agreed with Fernald’s recommendation and in the meantime, the city cannot do anything to the property.

“I told Mr. (Lawrence C.) Smith (Jr.) to deem the period of time between tonight and Nov. 17 as an opportunity for him to show good faith to the city of Brookhaven that he intends to move forward on this project,” Fernald said.