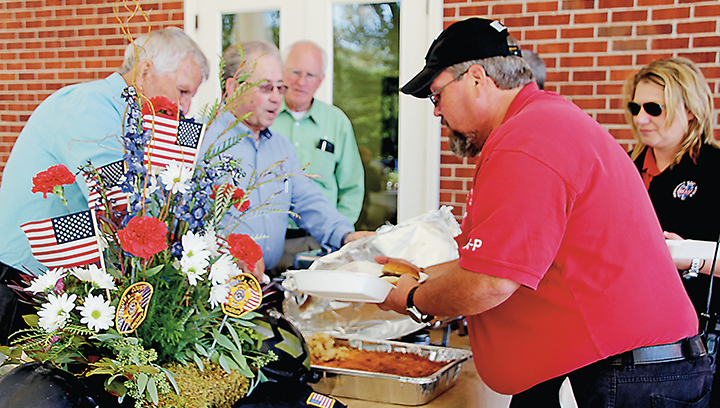 With the turmoil surrounding first responders this year, many Brookhaven residents have gone out of their way to show appreciation for all of the men and women who serve.

Farm Bureau and Riverwood Family Funeral Service partnered Tuesday to show local first responders how much Brookhaven and Lincoln County appreciate all that they do.

More than 100 first responders were treated to lunch, cooked by Farm Bureau representatives, and served by Riverwood employees.

Lincoln County Coroner Clay McMorris, who also co-owns Riverwood, said the appreciation cookout was a way to say thank you to all those who serve in some form or fashion.

“We wanted to show them that we recognize the sacrifices they make everyday to serve our community,” McMorris said. “We have excellent groups of first responders that should be celebrated.”

Farm Bureau representative Chuck Owens added, “Why wouldn’t we want to support our law enforcement? We could not say no to this opportunity to give thanks.”

As the first responders mingled with each other and those serving them, “thank you’s” were given freely.

As Stacey Smith, a firefighter with the Zetus Volunteer Fire Department, got up to leave after enjoying her meal, she thanked each server from Riverwood.

Her son, Ryan Smith, followed behind, shaking each server’s hand in thanks.

Sheriff Steve Rushing said in the past that community support is always needed, and Tuesday’s appreciation lunch was just one example of that.

“It’s great to know our community supports us that well,” he said previously. “It’s been very nice of everybody to remember us and show their appreciation of us.”

Riverwood co-owner Colby McMorris explained that he deals with local first responders on a daily basis in his line of work, and it is important to acknowledge their sacrifices everyday.

“Participating in a day like this is important for many reasons,” he said. “We wanted to make our first responders feel like they are apart of something and feel special.”

Stahl Urban history to be shared at Historical Society presentation

The Lincoln County Historical and Genealogical Society will host a program on the factory, Stahl Urban Company, on Thursday. The... read more