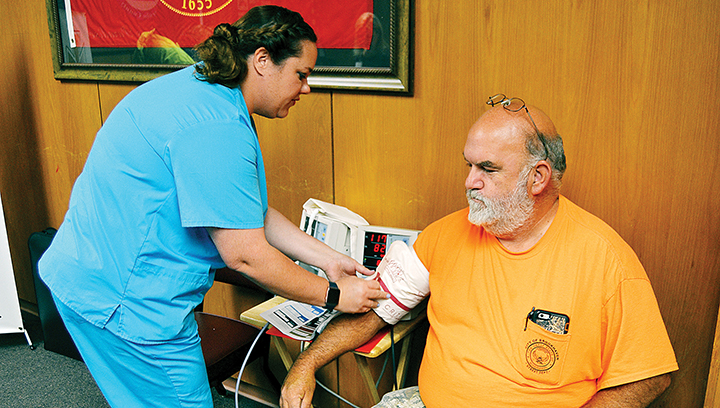 Brookhaven took one step to becoming a healthier community this week.

The city offered its 160 employees an opportunity to meet with local healthcare professionals at its second annual wellness fair recently.

The wellness event allowed city employees to educate themselves in three key areas — illness prevention, changing their lifestyle to a healthier one and the importance of taking advantage of their free “Healthy You” doctor visit.

“The health fair went really well,” Alderman-at-Large Karen Sullivan said. “We hope it served as a motivator for those wanting to make changes to their health. We were able to take care of lots of employees’ health year visits.”

In addition to the screenings, several booths were set up in the Lincoln County Government Complex board room with educational materials available for city employees to browse.

“We had a representative from the Mississippi Department of Health present as well as Mieshia Smith, the project coordinator for the Lincoln and Copiah counties Tobacco Free Coalition. Mieshia offered tips on how to give up tobacco,” Sullivan said.

Approximately 40 percent of the city’s employees turned out for the fair, Sullivan said.

“The numbers were good,” she said. “But they exclude the police department and fire department. We will be going back to both departments one day soon at a shift change.”

Many of the city’s officers and firefighters work a second job and were unable to come to the courthouse for their screenings.

“KDMC was unable to get to each department on the same day, but as soon as the (hospital) gives us their schedule, we’ll be going to serve our officers and firefighters,” she said.

“We feel that it is our responsibility to emphasize wellness to our employees and to help them keep their own health on their minds,” she said. “As we all know, prevention is the cornerstone of good health. It’s easier to prevent an illness than to treat it. The city wants to help its valued employees take the right road on their journey toward better health and, in turn, give us a healthier workforce.”

The benefits of living a healthier lifestyle do not stop with just the employees, Sullivan said.

“It also helps the city,” she said. “It helps with our insurance premiums.”

In the 2015-2016 budget year, Brookhaven’s health premiums for Blue Cross Blue Shield stayed the same. For the current 2016-2017, the city’s premiums were reduced by 15 percent.

Brookhaven was named one of Blue Cross Blue Shield’s Healthy Hometowns in 2013 and Mississippi’s Healthiest Hometown in 2014.

‘The Factory’ was a cut above the rest

Most old timers in Lincoln County can tell tales of “The Factory.” If you didn’t work at Stahl-Urban yourself, you... read more