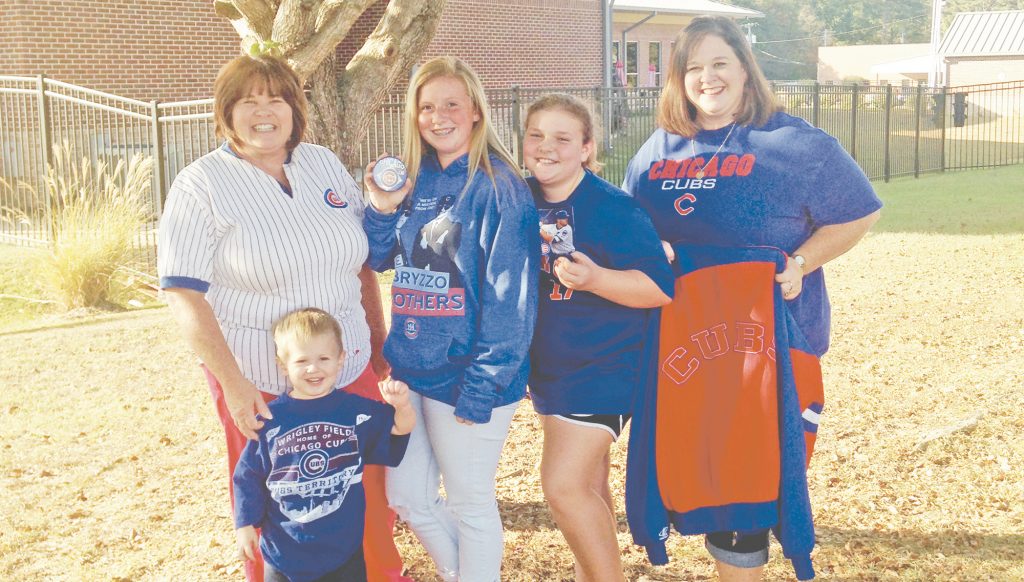 Diehard Cubs fans Dawn Fuller and Debbie Case grew up in Illinois, but moved to Brookhaven when they were teenagers. Their passion for the Cubs grew from an early age.

“We have been Cubs fans practically since birth,” Case said. “Our Pawpaw Hampton and mother were huge fans.”

The sisters’ grandfather, Pawpaw Hampton, was born in Brookhaven, but later moved to Illinois.

“When he moved up north, he became a Cubs fan. When my mother married into the family, she became a fan, too. Her father, my other grandfather, was a White Sox fan, so he wasn’t too happy when she switched sides,” Case said, laughing.

The sisters practically grew up in Wrigley Field, watching Cubs’ games every chance they got.

“We watched them every time they were on,” Fuller said. “We went to games, watched them on TV and listened to them on the radio.”

“My mother had box seats at one time at Wrigley Field,” Case said. “Watching games was always a big family thing.”

Fuller said she is continuing the family tradition by passing her love for the Cubs on to her 16-year-old and 10-year-old daughters.

When Kris Bryant threw the final out Wednesday night, screams of joy could be heard throughout the homes of Fuller and Case.

“Oh my gosh, I cannot even explain it,” Fuller said, tearing up. “We screamed and cried. All I could think of was my mother. She always wanted to see them win the World Series in her lifetime, but never did.”

The win is still surreal for the two sisters, bringing back memories they forgot they had.

“This win has brought back so many little stories and things that bring us together,” Fuller said.

“One time when I was little my Pawpaw Hampton was glued to the TV, watching a Cubs game,” Case said. “He wasn’t paying attention to me, so I got on the back of the couch and said, ‘Watch my fly like the Cubs,’ and then proceeded to flop on the couch. That got his attention for a few seconds. My mother used to tell that story.”

Another story that makes Case and Fuller laugh involves the Cubs and Creamsicles.

“I used to bet my grandfather on my mother’s side, who was a White Sox’s fan, every year a box of Creamsicles that the Cubs would beat the White Sox. I’ve bought a lot of boxes of Creamsicles in my day.”

The sisters and their families plan to soak up the victory for their team, explaining that the Cubs have been too humble to do it themselves.

“It’s amazing to me,” Fuller continued. “To follow them for so long, and for them to finally win. They are such a young team, and so humble. All of the players always lift a teammate up when asked about something. They don’t take credit for anything they did.”

The Cubs are the sixth team in World Series history to fall behind 3-1 and come back to force the seventh game.

“We turned it around this year,” Fuller said. “Watching them work as a team has been really fun.”

“Our cousins were pulling for them,” Case said. “I never lost faith that they would pull it out. Watching them win felt like we were carrying on the family tradition.”