Airman: ‘It feels great to be home’ 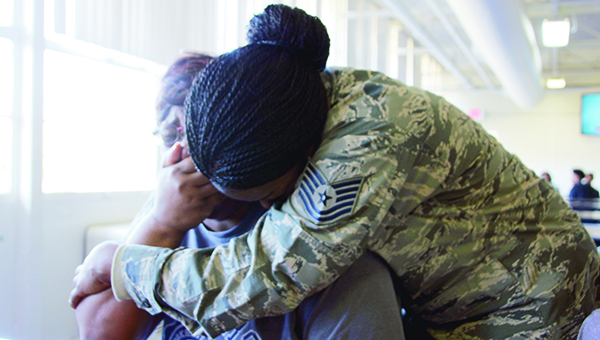 Photos by Alex Jacks
JoRina Jenkins surprises her mother, Patricia Jenkins, (above) and son, Zaviae’ Jenkins, (below) and at Lipsey School Friday after being deployed to South Korea for a year with the Air Force.

A little boy got the biggest surprise of his life when his mom came home a day early from her third tour overseas.

JoRina Jenkins, a graduate of Brookhaven High School and an Air Force flight scheduler, snuck up on her son, Zaviae’ Jenkins, and mother, Patricia Jenkins, while they were eating lunch together at Lipsey School Friday.

Zaviae’ and Patricia thought JoRina would be arriving home from South Korea on Saturday, after being gone for a year. 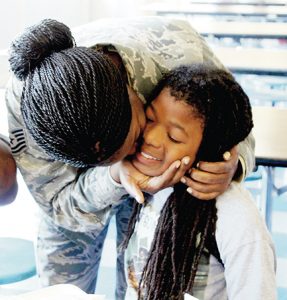 When JoRina came up behind the two and put her arms around them, screams of joy filled the air and tears began to roll.

Zaviae’ stared in shock at his mother while his family rushed out of the gym into the cafeteria, carrying welcome home signs.

As JoRina began hugging and kissing all of her family, Zaviae’s sixth-grade classmates and teachers cheered with excitement.

After wiping his tears and hugging is mother, Zaviae’ said, “I’m so happy. It was crazy (that she came early).”

“This is an unexplainable (feeling),” Patricia said.

This is not the first time Zaviae’ has gone without seeing his mother for a year.

“This was her third tour,” Patricia said. “Her first was in the Middle East. This is her second tour in South Korea. She has been gone for a year every time. It hasn’t really been hard this time because this is my third time keeping (Zaviae’) while she’s gone.”

Zaviae’ has lived with Patricia each time his mother has deployed.

“It’s kind of hard without my mama, but I be having fun with her (Patricia),” Zaviae’ said. “She let’s me play with the iPad. But my mama always takes me to places. She took me to Blue Bayou.”

Patricia said before JoRina deployed, the family to a trip to the Blue Bayou Water Park, and plan to go to Disney World this summer to celebrate her return.

“I’m ready to go to Disney World,” Zaviae’ said. “I don’t know what I want to ride. Probably everything.”

“We’re going to celebrate with the trip next summer,” JoRina said. “But, I have one more surprise to make before then.”

JoRina plans to travel soon to Tucson, Arizona, to pick up her 2-year-old son from his father before he deploys to South Korea for four years.

“He was with us (Patricia and Zaviae’), but his dad wanted to spend time with him before he left,” Patricia said. “It’s exciting.  We will have the family back together.”

JoRina decided last week she would surprise Patricia and Zaviae’ and then her toddler with her homecoming.

“I was just going to show up Saturday, but I’ve never really surprised them when I’ve come home, so me and my cousin got together and we planned this,” she said. “It feels great to be home.”