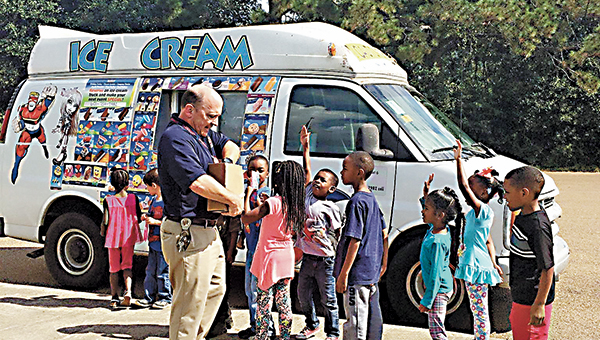 Thanksgiving is just around the corner, and Mamie Martin is helping set the mood by celebrating what it is thankful for most — community. In what will be the first fall fest for Mamie Martin, PTA members will be celebrating students while raising funds for new water fountains on Nov. 17.

“Our primary goal is to replace all water fountains to the ones that refill water bottles,” Melissa Peden, co-vice president of Mamie Martin’s PTA, said. “Second is to promote parental involvement and promote a sense of community for the school.”

Teachers have volunteered to work the different booths to show their students that they care about them outside of the classroom, too. Among the activities will be simple carnival games, such as a cake walk and bean bag tosses. They will also be selling food such as hamburgers and chips. A drawing will also be held with each chance costing $1. The prizes include a insulated tumbler and cooler bag set donated by Stan King Chevrolet, a gift certificate to Stillwater Studio, a basket of hair products from Studio 125 and a manicure from The Works. 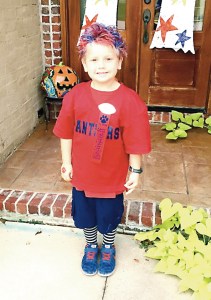 Parents Ryan and Whitney Holmes went all out to dress Colin up for red and blue day during homecoming week. 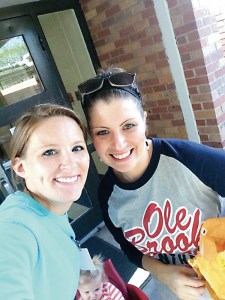 Beth Hutchinson and Lori Laird making the rounds in the halls during spirit sales with Beth’s toddler, Kinley, Jr. in tow. 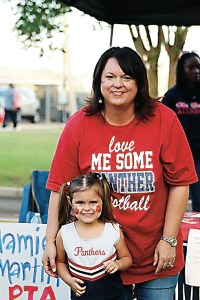 “It’s to promote parental involvement,” Peden said. “Studies show the earlier a parent or someone is involved in education, the better the test score and social skills.”

Peden said they chose the Thursday before Thanksgiving to not only show gratitude but to also instill a sense of excitement when it comes to school.

“We want to send them off by showing them school is fun,” she said. “I want to keep the excitement for the kids and show the value of education.”

The goal is for the event to become an annual fundraiser and to grow it each year.

“As much as the softball field will hold, we’ll expand it,” she said.

Peden said each year, they try to have a big project to raise funds for, such as putting an HVAC unity in the PE building, but the PTA does much more than help improve infrastructure needs. They have helped buy ice cream for AR readers with a certain number of points and sponsored the showing of “The Polar Express” at the Haven near Christmas. This year, they wanted to ensure that every student was able to dress up at least one day for homecoming, so they bought leis for everyone.

“One of us is at the school every day,” she said.

Promoting a sense of pride and working to better the district has been a life-long pursuit for Peden, who has two children at Mamie Martin — Cooper in first grade and Aubri in K4.

“We love Ole Brook,” she said. “Brookhaven has always been a good school district, and we’re headed in a good direction with new leadership under (Ray) Carlock (BSD superintendent).”

Peden cited the recent improvement from a D to a C in accountability ratings as proof.

And that’s where the PTA comes in.

Peden said promoting schools easily turns into promoting the city because it helps create a sense of pride.

Peden is partially devoted to the district because of her own family, but it’s about more than her four Panther kids. It’s about the future.

“So many can’t wait to get out,” she said. “But when they start having a family, they come back.”

As people settle down, they realize they want to be a part of somewhere they already have roots.

Having good schools promotes commerce because as doctors and businesses explore their potential homes one of the important questions they ask is how the schools are.

“A good school system encourages them to want to come here,” she said.

For the time being

Yesterday was a day filled with emotions for me and my little family as we went to check up on... read more