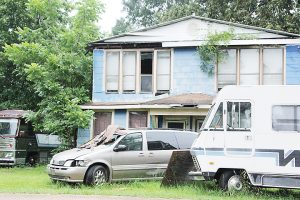 File photo/The Brookhaven Board of Aldermen will hear from owners of this property on Railroad Street as well as their neighbors at a public hearing Thursday.

Railroad Street residents are closer to learning the fate of a hazardous structure that has posed a concern for many years.

The Brookhaven Board of Aldermen will hear from the owners of 215 Railroad St. and the owners of neighboring properties during a public hearing Thursday at 5 p.m.

“We’ve got notebooks concerning the hearing,” City Attorney Joe Fernald said. “We’ve gone out and taken pictures of the property in question. We’re going to take some more prior to the meeting, but you’ll have a book with the law in it, time frames and all the processes that we’ve gone through for the hearing.”

At an October board meeting, city building inspector David Fearn notified the board that 215 Railroad St. — a property that had been on the city’s building clean-up list for several years — had been transferred to two new owners.

Fearn had learned of the transfer the day before the meeting.

“After speaking with the city attorney, we need to have another public hearing with the new owners. We have to go through the same process with the two new owners,” he said

Lawrence C. Smith Jr., one of the new owners of the property, requested the board give him time to clean up the property and structure before following through with its removal, as recommended at a July public hearing.

“Me and Roger Smith, my older brother, are the new owners of the property at 251 Railroad St.,” Smith told board members at the Oct. 4 meeting. “What we are asking is the board to allow us 90 days to clean up, secure the property, get that outward appearance in decent shape and up to city code.”

Despite the board’s best efforts to follow the proper procedure in this instance, at the Oct. 18 meeting city attorney Joe Fernald, who was absent at the Oct. 4 meeting, said the proposed date was too soon and did not allow enough time to contact one of the owners. He recommended the public hearing be pushed back to Thursday.

“There was subsequent transfer of ownership of the property after the meeting had been set and when notice was given, but prior to the hearing,” Fernald said.

The property was transferred from Lawrence C. Smith Sr. and his wife to his sons, Lawrence C. Smith Jr. and Roger Smith. At the time of the meeting announcement in July, the sons were not notified of the public hearing.

When it was decided last month to hold another public hearing for the Railroad Street property, the sons were notified, but Lawrence C. Smith Sr. and his wife were not, Fernald said.

The reasoning behind rescheduling the public hearing allowed all parties involved — the new and old owners — to be notified once again, Fernald said.

The Board of Aldermen cannot take action on an item at a public hearing. Fernald recommended the board think about when it would like to hold a special called meeting to take action on the matter.