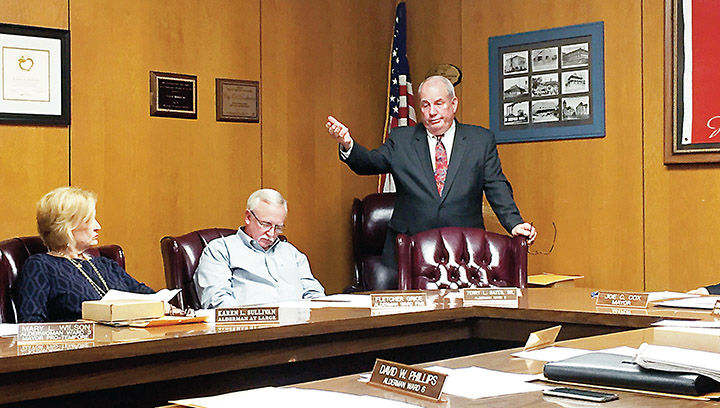 Photo by Alex Jacks/City attorney Joe Fernald explains to the Brookhaven Board of Aldermen his concerns regarding the newly revised transient vendor ordinance at Tuesday’s board meeting. From left are Aldermen Karen Sullivan and Fletcher Grimes.

The Home Seekers Paradise attracts hundreds of vendors to its downtown streets every year hoping to peddle their wares.

The Brookhaven Board of Aldermen became concerned with the documentation process vendors must go through to set up in the city earlier this year. As a result, a more detailed transient vendor ordinance was passed in August.

City attorney Joe Fernald told the board Tuesday that the ordinance was in need of further revision after an incident occurred recently.

“We’re going to have to amend it,” he said. “The penalty was not put at the bottom of the ordinance stating that it’s a misdemeanor violation. We had a vendor who questioned the application of the law as it applied to him. I told (Police) Chief (Bobby Bell) to hold off doing anything to him. He made an argument that gave me pause.”

In addition to the ordinance missing the penalty, Fernald said he had some concerns about the way it fit into under the statute.

“There are exceptions,” he said. “I’ve got to find out just exactly how that exception is qualified and go from there.”

The revised regulation is supposed to provide transient vendors with defined requirements for licensing and operation at an event.

The ordinance outlines how a transient vendor should apply and obtain a license to transact business. They are required to file the license application with the county tax collector.

Transient vendors are not allowed to operate within the central business district of the city, unless allowed by the mayor and board. That requires a special permit.

The ordinance does not apply to civic and nonprofit organizations, or any sale, fair, circus, auction or bazaar sponsored by a church or religious organization; garage sales held on premises devoted to residential use; sales or repairs of crafts or sales or repairs of items made by hand by the person making the crafts or items; duly licensed flea markets operating from a fixed location; and the sales of agricultural services.

The Farmers Market and Ole Brook Festival are examples of vendors not affected by the newly revised ordinance, Fernald said.

“I don’t know enough about the person who objected, about his business, what he does. In theory he could come under that exception,” he said.

As of right now, the transient vendor ordinance approved in August will stay in place, but the board can expect to see some revisions once Fernald consults other experts on the matter.

The issue of the transient vendors ordinance came up earlier this year when Fernald sited several incidents where vendors were causing trouble for permanent business owners downtown.

The transient vendor ordinance went into effect mid-September. The complete ordinance is available at the City Clerk’s office.

A man accused of armed robbery during a break-in in Bogue Chitto in 2014 pleaded guilty Wednesday in Lincoln County... read more