Trooper Mitchell Chappell, of Brookhaven, an officer with the Mississippi Highway Patrol injured Sept. 11 on his way to a traffic accident, has made several positive strides to recovery. 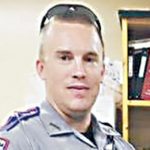 “Mitch has now progressed to the point in his recovery where he is independent with walking with supervision, eat and regular activities that we take for granted so often,” Amanda Chappell, Mitchell’s wife, said. “We have no more tubes.”

Mitchell, 27, and Amanda, live in Brookhaven, where she’s a home healthcare nurse.

Since his accident, the trooper had been in the critical care unit of University of Mississippi Medical Center for treatment of his injuries, which included a fractured skull on the back of his head, before being transferred to a rehabilitation center in October, MHP spokesman Cpl. Brando Fortenberry said.

Amanda said her husband will begin outpatient therapy on Nov. 28 in Atlanta.

“We still have a long way to go to get back 100 percent, but we have been so blessed with Mitch’s progress so far compared to any diagnostic testing,” she said. “He is in great spirits and cognitively remembers pretty much everything but the wreck itself and the weeks following in ICU. He has been so overwhelmed with all of the support he’s seen online and in the community and is so very thankful, as am I, for every prayer, donation and word of encouragement.”

Chappell was on his way to a traffic accident in Bogue Chitto when his car apparently hydroplaned in the northbound lane of I-55 near mile marker 31. Dispatchers lost radio contact with him, and he was found soon after unconscious in the restraints of his cruiser, which had collided with a patch of trees, Fortenberry said.

All three cruisers were totaled, Fortenberry said. The other two troopers were not injured.

Airport to see big upgrades in the future

The Brookhaven airport has recently received quite a bit of attention in order to bring it up to par. Ryan... read more