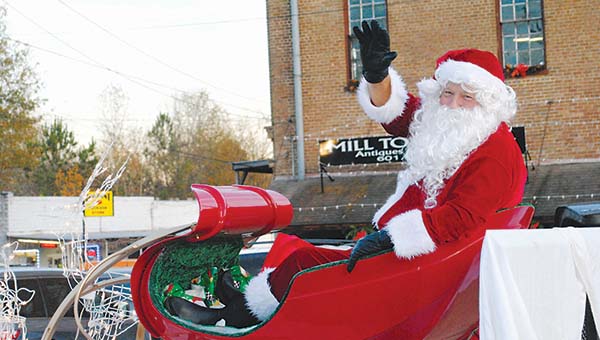 File photo/Santa Claus will ride in the last float of the annual Wesson Christmas Parade Friday. The parade kicks off the town’s holiday season.

Wesson will ring in the holiday season with its 44th annual Christmas parade Friday.

The parade will begin at 4 p.m., with groups lining up at the old Sunflower Grocery building and Wesson Baptist Church at 3:30 p.m.

Following tradition, police and fire officials from Wesson and neighboring departments will mark the start of the parade up and down Hwy. 51.

Santa Claus will round out the parade on the last float of the night, bringing holiday cheer to the crowd. All of the floats’ riders will be tossing candy to the crowds.

The Wesson Chamber of Commerce and the Friends of the Library will help make the celebration an evening-long affair by providing entertainment following the parade, Carraway said.

“The Chamber and Friends of the Library will host several choirs from surrounding churches to sing,” he said.

In addition to the carols, the Friends of the Library will be playing a Christmas movie and hosting pictures with “The Grinch.” There will also be horse and buggy rides, refreshments and face painting. All of the activities will take place at the Wesson Library Pavilion and Garden from 5 to 6:30 p.m.

From 6 to 8 p.m., the Wesson Fire Department will open up the station to the public to visit Santa Claus.

“We hope these events will kick off the town’s festive season,” Carraway said. “We invite everyone out to have some holiday fun.”

For more information regarding the Wesson Christmas Parade, contact Carraway at 601-754-0394.

The Brookhaven Christmas Parade is also soon approaching. The annual parade, which is themed “Music and Magic,” will be Thursday at 6:30 p.m.

Miss Mississippi Laura Lee Lewis will serve as the grand marshal this year.

“I thought she was the obvious choice, being a Brookhaven native,” Chamber Program Director Katie Nations said. “She was so excited. We’re honored that we could have her, with all of her engagements.”

The Chamber will be hosting Santa Claus on a special sleigh at the end of the parade, Nations said. He and the Chamber’s Les Belles Junior Ambassadors will be tossing candy to the crowds.

“They’ve got good stuff to throw at the end of the parade,” she said.

The parade will take the same route as in previous years.

The parade will start with the fire brigade at 6:15 p.m. followed by the grand marshal’s car at 6:30 p.m. Miss Merry Christmas Mackenzie Jackson will be up next and she’ll be followed by the rest of the parade entries and area bands.

For more information regarding the Brookhaven Christmas Parade, contact Nations at 601-833-1411.

Photo submitted/A Mississippi Blood Services employee checks on a donor at a recent blood drive. One of the best gifts... read more