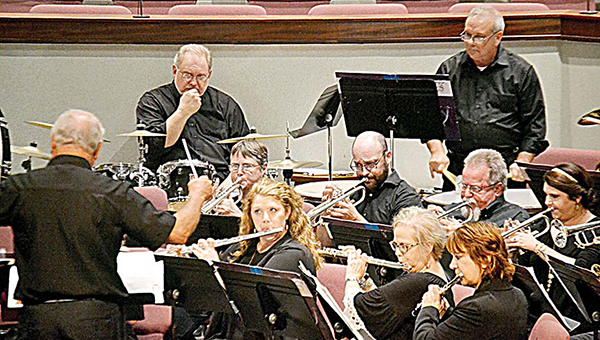 Photo by Donna Campbell/Leroy Smith leads members of the Ole Brook Wind Symphony in a fall concert at Easthaven Baptist Church. Their winter concert will be Dec. 13 at the church and Dec. 15 at State Theatre in McComb. Both shows, which are free to the public, begin at 7 p.m.

It’s the most wonderful time of the year, and what better way to enjoy it than listening to Christmas music. Some may dread the repeat of Christmas songs everywhere a person turns in December, but others, like the musicians in the Old Brook Wind Symphony, live and breath for the joyous sound.

The symphony will once again be sharing its love of the season by performing two free Christmas concerts this month.

“We are beginning to get into the groove now and want to get the word out to as many people as possible about the show,” he said.

Leroy Smith, a retired band director from the McComb area, will direct both performances, Edge said.

“The program will consist of an assortment of holiday themed music that will be familiar to most people,” he said.

“Jingle Bells,” “Rhapsody,” “Sleigh Ride” and themes from the Nutcracker Suite are some of the many pieces that will be performed.

Despite the “Ole Brook” name, the symphony includes members from various communities. Edge said the symphony consists of residents from all over Southwest Mississippi including Pike, Franklin, Rankin and Copiah counties.

While many in the symphony are retired band directors, there’s also a dentist, interior designer, teacher, banker, radiation tech and soldier.

The Ole Brook Wind Symphony began in 2001 as an idea by Susan Jones and Patsy Warren, who’d been to other community concerts and felt like Brookhaven needed to be represented as well.

They were joined by Shaw Furlow, George Edmonson and Stanley Stewart. Only Stewart still plays with the symphony, said Edge, who has been with the group since 2003.

The symphony is a completely volunteer group and anyone who plays brass, woodwind or percussion instruments is invited to join.

There is no age limit, dues or fees and no audition is required to join. “They need to be able to play the music and in most cases should have their own instrument,” Edge said. However, other musicians in the group can help with finding an instrument if one is not available, he said.

The band practices on Tuesday nights during the school year at Alexander Middle School.