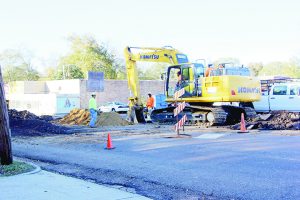 Photo by Alex Jacks/Greenbriar, a local construction company, is replacing a water line on Court Street for the city.

Q: Why is part of Court Street closed?

A: Drivers on the downtown Brookhaven street can expect delays through the next week.

Lewis anticipates the construction company to be finished replacing the line in about a week, weather permitting. That section of Court Street will then be reopened, he said.

“We will pack the dirt back over the road and then let it set,” Lewis said. “Hopefully, somewhere around January or February, we will have someone come in to repave that section of the street.”

The Brookhaven Board of Aldermen accepted Greenbriar’s bid of $41,450 to replace the water line at a November board meeting. The money will come out of the city’s water department budget.

The decision to replace the water line came because the constant repairs were hindering the business of several salons and stores down the street.

Kris Xifos, the water and sewer superintendent, told the board that every time the department had to repair the two-inch line, they had to shut the water off going to each business on the street.

Lewis and Xifos both expect the new water line to fix the problem.