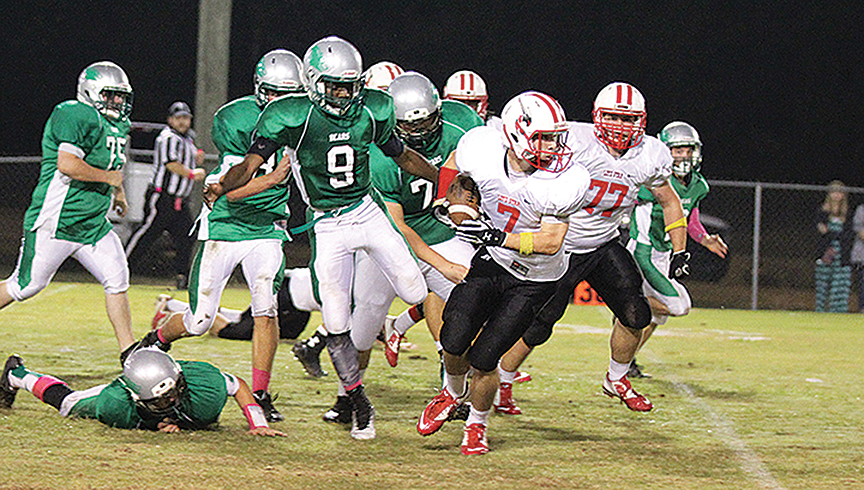 It’s been a busy and active season for senior quarterback and linebacker Parker Flowers, but his efforts on the defensive side of the ball are being recognized as he was named the defensive MVP from region 7-2A.

Flowers started every game of the 2016 football season for Loyd Star at quarterback and at linebacker. As the captain and communicator of the Hornet defense, Flowers totaled 139 tackles on the season, 87 of which were solo tackles, averaged just under 12 tackles per game and added on one fumble recovery on the season.

Flowers had double-digit tackles in every game he played this season and led the region in total tackles on the season.

“He was our best defensive player on our team by far,” Loyd Star head coach Adam Cook said. “He’s a tremendous talent and he worked extremely hard on and off the field to earn this and I’m very proud of him.”

At quarterback, Flowers had 957 passing yards on the season with 10 touchdowns and eight interceptions, leading Loyd Star to a 4-8 record.

As the leader on both the offense and the defense for Loyd Star, Flowers took on major responsibilities for leading Loyd Star during the 2016 season. Taking on this role could provide to be too much for one player to handle, but Cook was impressed with the efforts of Flowers and his work ethic to play his best on both sides of the football.

“He’s taken that leadership role on both sides of the ball for a while and he’s handled it so well,” Cook said. “He’s very cerebral, a student of the game and does his homework in preparing for games. He’s grown and matured over the past couple of years and it’s really shown on the football field each year.”

The tragic death of his brother Peyton Flowers two years ago was a moment that changed Parker’s life forever. Playing in the memory of his brother has motivated him to become a better person on and off the field, which helped lead him to have a storybook ending for his senior year.

“He really wanted to play his absolute best for his brother. That’s what Peyton would’ve wanted out of him,” Cook said. “As competitors when they played with each other, they pushed each other every single day. Parker took over as a leader for his brother and played his hardest every day. We’re going to miss Parker very much next season.”

In addition to Flowers, Loyd Star sophomore wide receiver James Beard was named to the 7-2A All District first team on offense. Beard was outstanding at wide receiver for the Hornets, reeling in 27 catches on the season for 719 yards and 10 touchdowns. Beard averaged a whopping 26.6 yards per catch on the season as well.

“James is a tremendous talent and as a sophomore, he’s got so much more room to grow,” Cook said. “If his work ethic can improve and his maturity improves over time, he can really be a special player for years to come.”

West Lincoln junior wide receiver Chase Owen was also named to the 7-2A All District first team on offense.