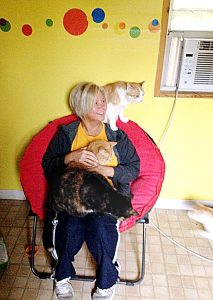 Photo submitted
Belinda “Dinki” Davis plays with some of the 36 cats she’s rescued and kept in two covered fenced kennels in her back yard with heat lamps and air conditioners. Dogs got in the locked gate of one of the pens last week and mauled 16 cats to death.

When a Lincoln County pet rescuer drove home last week, she expected to see her babies — dozens of purring felines happy to see her. What she found instead has left her so traumatized she hasn’t been able to go into her back yard.

Belinda “Dinki” Davis, who owns Dude’s Hot Biscuits with her husband Jimmy, built a special fenced pen with a roof to house her cats in the back yard of their home. They live on Nalco Lane off Nola Road near the Heucks Retreat community.

She had 36 cats — more than most people would consider normal, but Davis took care of them with a passion. She rescued them, provided medical care, got them spayed and neutered and provided unconditional love to God’s creatures. She knew each one’s name and personality. The Davises also own six rescue dogs.

Everything seemed normal at 3 a.m. Thursday when they left home to prepare for the breakfast rush at Dude’s. It was a cold night so they’d turned on the heat lamps and put up tarps to block the cold wind before they had gone to bed.

When she drove home about 8:30 a.m. to check on the heat lamps, she found what could be described as a murder scene. “When I pulled into my driveway, I could hear my dog barking with a growl. I heard other dogs barking and I knew they were large dogs by the bark and they sounded like they were behind the pen,” she said.

She immediately called her husband at the restaurant and waited. “I was scared to get out of the car,” she said.

Two of a neighbor’s dogs, a German shepherd and a pit bull, were in her yard. The shepherd had charged her before, she said.

When her husband arrived and pulled down the tarp, they witnessed the worst thing an animal owner could ever think of.

“Dead cats just ripped to shreds,” she said, crying as she recalled the horrific scene. “They just mauled them to death, horribly.”

The dogs were still in attack mode when they walked into the shed, she said. Jimmy Davis took pictures of the cats’ remains that were scattered throughout the kennel. The couple called for help and broke down in tears as they waited for the Lincoln County Sheriff’s deputies to arrive, she said.

Fifteen cats were killed while in the safety of their 20-foot-by-40-foot kennel. Davis is amazed the dogs were able to get into the padlocked gate of the pen. “They were so strong and pushed it open,” she said.

The cats were living safely outside in a closed -in kennel with concrete floors, galvanized fencing, a metal roof, air-conditioners, and a partially enclosed metal sliding doors. “The dogs had to be very strong to barge through everything. It’s worth about $10,000 dollars. It’s not cheaply made,” she said.

Davis’ brother-in-law found a kitten, Lanie Bug, still alive in the pen and rushed her to his vet, Davis said. She didn’t make it, bringing the total killed to 16. The other cats were in a different enclosure that Davis said thankfully had been untouched by the dogs.

The loss of the cats has affected the entire family, especially Davis, who is known as a strong woman who never cries. “I’ve seen and been through a lot, but this, this is something I’ll never get out of my head,” she said with a trembling voice trying to hold back more tears.

Davis is known as a pet rescuer, taking animals out of horrible situations and bringing them back to life to live with her in a safer environment.

She thinks the dogs that killed her cats should be euthanized before other animals, or possibly a child or adult, are hurt.

Currently, Lincoln County has no leash law  and there is no law in the county that says dogs must be locked up. The county does have a vicious dog ordinance, Lincoln County Sheriff Steve Rushing said, but requires reports of aggressive behavior be made before an incident occurs.

He said the only call that’s been made was one or two months ago and the complaint was about dogs in the neighborhood that seemed malnourished.

“The deputy went and looked at the dogs and they did not appear to be starving,” he said.

The deputy who filed the report Thursday said the dogs were still in the pen when he arrived. “The bulldog came toward me growling and with its hair raised on its back. This dog was being aggressive toward me through the chain link fence. The other dog was not aggressive toward me,” he said.

The deputy explained to the dogs’ owners that the “dogs had to be kept put up” and that he would contact Lincoln County Justice Court.

“The deputy from yesterday said one of the dogs did growl at him but it was on the other side of the fence and he did not fear for his safety or any others,” Rushing said. “The owner of dog had no problem removing the dog and taking it home.”

Davis said she will take the necessary steps to stop the vicious dog attacks even if that requires them going to court. Her main concern now is the safety of others.

“Something needs to be done soon. Not only for an animal, but for [the safety of] a child or adult,” she said. “I do not want anybody else to go through this, or a child be killed.”

Photo by Alex Jacks/The Brookhaven Board of Aldermen called a special work session last week to discuss the paving and... read more